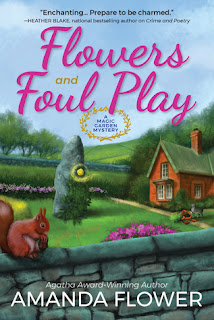 Fiona Knox lost her fiancé and her flower shop—but when she flies to Scotland to inherit her godfather’s cottage and possibly magical walled garden, she may lose her life as well when she’s swept into a murder investigation.

Florist Fiona Knox’s life isn’t smelling so sweet these days. Her fiancé left her for their cake decorator. Then, her flower shop wilted after a chain florist opened next door. So when her godfather, Ian MacCallister, leaves her a cottage in the Scottish Highlands, Fiona jumps on the next plane to Edinburgh. Ian, after all, is the one who taught her to love flowers. But when Ian’s elderly caretaker Hamish MacGregor shows her to the cottage upon her arrival, she finds the once resplendent grounds of Duncreigan in a dreadful shambles—with a dead body in the garden.

Minutes into her arrival, Fiona is already being questioned by the handsome Chief Inspector Neil Craig and getting her passport seized. But it’s Craig’s fixation on Uncle Ian’s loyal caretaker, Hamish, as a prime suspect, that really makes her worried. As Fiona strolls the town, she quickly realizes there are a whole bouquet of suspects much more likely to have killed Alastair Croft, the dead lawyer who seems to have had more enemies than friends.

Flowers and Foul Play is atmospheric, whimsical, and absolutely enchanting … I loved this story and can’t say enough good things about it!

As a rule, I don’t care for paranormal stories at all, but Flowers and Foul Play is that rare exception, and it works incredibly well in this story. I’ve been wanting to try one of Amanda Flower’s books for a good while, but the bottom line is that I’m drawn to British fiction and could not resist the Scottish setting and appealing storyline – and what an enjoyable time I had! The dictionary defines “whimsical” as being “playfully quaint or fanciful, especially in an appealing and amusing way,” and that perfectly describes this story. From a mysterious “magic” garden, to the cutest quirky animals, I was fascinated and really didn’t want the story to end.


Flowers died but always came back, be it through a bulb,
a cutting, or a seed. They always found a way to go on.
I wanted that kind of resilience in my own life.
- Fiona

Fiona Knox actually does have that resilience and her inner strength shines through in spite of all that recently happened in her life – a fiancée who dropped her for the cake decorator, the loss of her flower shop thanks to a chain store, and the death of her beloved godfather, Ian MacCallister. The story opens as Fiona arrives at the picturesque Scottish cottage bequeathed to her by Ian, where she is met by the caretaker, Hamish MacGregor, Duncan (a most fascinating pet squirrel) – and a dead body in the garden. There’s also the fascinating Chief Inspector Neil Craig, who I am inexplicably drawn to.

More characters are slowly introduced as Fiona visits the nearby village of Bellewick, intent upon discovering more about the deceased lawyer, Alastair Croft, and I loved how we’re given time to get to know each one. Amanda Flower is a gifted writer with quite an imagination, and I wavered between wanting to read quickly for the solution, but slowly so as to savor each word and nuance. There’s also a twist and conclusion that I never saw coming.

Amanda Flower has written several series, so if you’re a cozy mystery fan, I encourage you to pick up this book or one of her others and be prepared for a treat. Flowers and Foul Play gets 5 stars from me and goes on my “best of the best” list. Can’t wait to see what comes next!