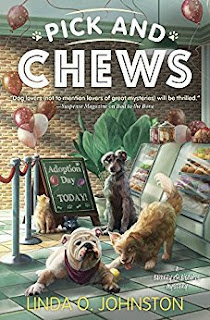 Carrie Kennersly tries to help her veterinarian boyfriend when he’s under suspicion of murder…Is he a keeper, or should she let him go off-leash for good?

As a technician for a local vet and the owner of the Barkery & Biscuits dog bakery, Carrie Kennersly is excited to host a rescue animal adoption event. She’s also excited to be in a relationship with veterinarian Dr. Reed Storme, despite his pleas for her to butt out of the murder cases she keeps finding herself involved with. Yet when Reed is accused of killing his former veterinary colleague, he seems a lot more agreeable to having amateur detective Carrie butt back in. Can Carrie clear Reed, or does she care too much for a killer?

Pick and Chews, set in the Knobcone Heights community in the San Bernardino Mountains of Southern California, is a cozy mystery that should especially appeal to animal lovers. Everything revolves around the local veterinarian clinic and its staff, which includes part-time technician Carrie and her veterinarian boyfriend, Reed. Pride, envy, and vindictiveness all factor into the mystery theme, and there’s no love lost for the murder victim.

Love for animals is a well-developed theme, and I wanted to cheer for the pet rescue efforts between the vet clinic and the Mountaintop Rescue facility run by Carrie’s friend. That Carrie isn’t 100% certain that Reed didn’t commit the murder also adds tension to the narrative.

As far as the mystery goes, Pick and Chews easily stands alone. However, the characters lacked a certain depth and relatability that reading the series from the beginning would probably have given. I was also uncomfortable that Reed and Carrie had an intimate relationship without any serious commitment to each other. And one other thing that would have made this story much better? Omit the profanity.

Overall, I enjoyed the veterinarian world and emphasis on animal rescue. The murderer’s identity was a surprise and it was fun to look back at clues that I had missed. 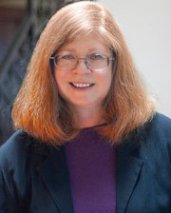