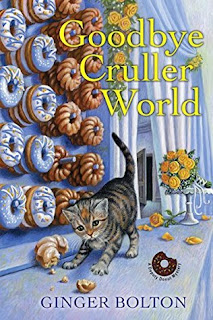 Named after her beloved tabby, Deputy Donut, Emily Westhill's donut shop in small-town Fallingbrook, Wisconsin, is doing so well, she's expanding into catering weddings. But a killer is about to crash the reception . . .

Normally, Emily's eyes tend to glaze over when prospective brides go on about their wedding plans. But when the owner of the clothing shop, Dressed to Kill, asks Emily to design a donut wall for her reception, she's immediately sweet on the idea. With the help of her father-in-law and business partner--the former police chief of Fallingbrook--she hangs the treats from dowels on the wall so guests can help themselves.

But that night, when the groom ends up on the floor with signs of poisoning, Emily suspects someone has tampered with her treats. When the groom dies, there's no way to sugarcoat it: she's got a murder on her hands. Despite a list of suspects as long as the guest list, Emily vows to find out who created the killer confection to save her shop's reputation and keep the bride out of handcuffs. She'll have to move fast . . . before the poisoner takes a powder.

Goodbye Cruller World – honestly, who comes up with these crazy titles? – is a delightful read that, for me, really hit the spot for a relaxing cozy mystery. This is book #2 in the Deputy Donut series, set in the quaint small town of Fallingbrook, Wisconsin. The setting is great, and the only thing I could ask for is descriptive passages that create a more vivid sense of place. I also enjoyed the previous book, Survival of the Fritters (click on title to see my review), and hope that Emily’s neighbor, Lois, will be featured in future books.

Emily is so very likeable as a lead character, realistic and someone I would enjoy having as a friend. There’s a complexity and sadness as she continues to deal with the death of her husband some years ago, and she is surrounded by a great network of family and friends. That network includes law enforcement officials, giving credibility to her reason for investigating. I especially enjoyed the growing friendship between Emily and police detective Brent, and am pulling for further development soon.

The Deputy Donut shop, co-owned by Emily and her father-in law, is hired to make a donut wall for a friend’s wedding reception – such a fun and creative idea! The number of suspects is exactly right, enough to keep readers guessing, but not too numerous to keep straight. And I can’t leave without mentioning lead detective, DCI Detective Yvonne Passenmath (present in the previous book also). I just don’t like her, she has no redeeming qualities, but I guess she does add conflict to the storyline. However, with her penchant for assessing blame based on her negative personal feelings, I wonder how she achieved her rank. It would be great if she disappeared from the series altogether!

The “icing on the cake” for me is that Goodbye Cruller World is a clean read, which I greatly appreciate. And I absolutely adore Emily’s cat, Dep, who adds so much richness to these stories. There’s plenty of room for further character development and I look forward to Emily’s next adventure. 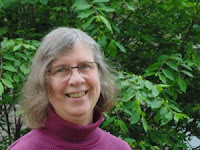