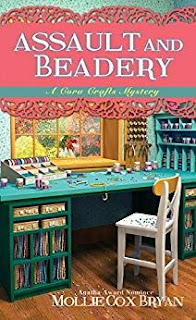 All of Cora Chevalier’s dreams are coming true. Since moving to Indigo Gap, North Carolina, the busy crafting maven has been blessed with a great boyfriend, a lovely home, and a booming craft retreat business. But on the eve of her first Crafty Mom’s Escape Weekend, tragedy strikes again in Indigo Gap. This time, it’s curtains for Stan Herald, the disagreeable director of the local theater group, who’s murdered on the opening night of their new production. Worse, Cora’s friend Zee is accused of the crime.

Cora is determined to prove her friend’s innocence, but Zee’s mysterious past is making that difficult. And with a list of suspects longer than a double spool of satin cording, getting a bead on the real culprit won’t be easy. With her friends Jane and Ruby at her side, Cora must string together the clues and solve Stan’s murder before the killer gives an encore performance.


What an odd town Indigo Gap, North Carolina, is,
she thought. She’d been here a little over a year,
and this was the third murder.

Assault and Beadery is packed with all that makes an excellent cozy mystery – character depth, well-plotted mystery, and an appealing small-town setting that you’d love to visit. Mollie Cox Bryan gives enough background so that this fourth book in the Cora Crafts series stands alone.

The fictional Indigo Gap, located in western North Carolina, is a delightful small town that’s proud of its heritage. From street names to quaint shops, the word “blue” is incorporated. Cora and her two business partners, Jane and Ruby, combine their skills – both in the making of crafts and the solving of murders. And Cora’s lovely Victorian home, Kildare House, provides the perfect setting for their craft and retreat center.

With so many cozies involving the food industry, the craft-making theme is refreshing, and I didn’t realize so much was involved in the making of bead crafts. The murder hits close to home when a personal friend is accused of the crime, a friend who just happens to have a mysterious past with hidden musical talents. All three leading ladies are easy to connect with – Cora, skilled at repurposing, the moody but adorable Ruby, and Jane, who is my favorite. Having fled an abusive past, she and her daughter, London, reside on the grounds of Kildare House.

Bryan’s writing flows easily and the story is well paced. The only negative is the occasional use of mild profanity, but Assault and Beadery is an enjoyable and satisfying read overall. 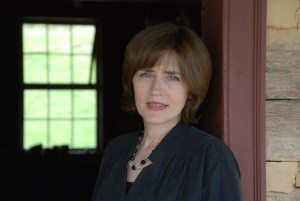 Mollie Cox Bryan is the author of the Cumberland Creek Scrapbooking mystery series and the Cora Crafts mystery series. She is also author of two cookbooks, the regional bestseller Mrs. Rowe’s Little Book of Southern Pies and Mrs. Rowe’s Restaurant Cookbook: A Lifetime of Recipes from the Shenandoah Valley.

An award-winning journalist and poet, she currently blogs, cooks, and scrapbooks in the Shenandoah Valley of Virginia with her husband and two daughters. Scrapbook of Secrets was nominated for an Agatha Award for Best First Novel. Visit her on the web at molliecoxbryan.com.