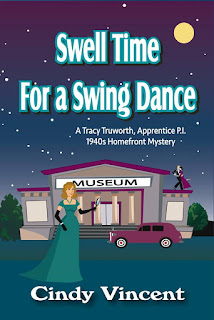 December 31, 1941. Young Houston socialite Tracy Truworth, Apprentice P.I., can’t imagine a better way to send off the old year and ring in the new than by dancing through the night with her fella, Pete Stalwart. But a swell evening soon takes a terrible turn when a fellow dancer with moves like Fred Astaire ends up dead on the dance floor. And before the hands on the clock can point to midnight, a finger is pointed at Pete, accusing him of murdering the young man.

Then after Pete is hauled away in handcuffs, the night goes from bad to worse . . . and Tracy’s sweet grandmother is accused of stealing an ancient artifact from the museum. Now Tracy must team up with her boss and mentor, Sammy Falcone, in order to find the stolen statuette, unmask the real murderer, and restore the reputations of those she loves the most.

Yet as America becomes embroiled in another world war, the risks and sacrifices intensify—even on the homefront. And Tracy soon finds her own home invaded by a near parade of questionable characters, while unsavory suspects lurk in the shadows, and a ruthless reporter makes her life miserable. With time ticking against her, Tracy must be willing to swing past the setbacks and hop through the hazards if she hopes to solve a mystery that involves a lot of dancing . . . and a lot more danger.

Swell Time for a Swing Dance has a different feel from most mysteries that I read, and I enjoyed it very much. The action begins in Houston on New Year’s Eve of 1941 and has somewhat of a Nancy Drew/Judy Bolton feel to it. I merely mention Nancy Drew because most readers will immediately connect with her, but the authors of these two popular series were contemporaries, and Judy Bolton was by far my favorite. Judy investigated crime, along with her boyfriend Peter, which reminds me of Vincent’s lead characters. While not a YA story, this is a clean story all ages can enjoy.

One strength of this story is the World War II setting. If I didn’t know better, I’d think that Cindy Vincent had experienced it personally, because it’s that realistic. From books, to movies and big bands, the culture of that era is vivid. I loved the opening scene of swing dancing at a gala museum event, and even looked up this dance online to get a better feel for Tracy’s harrowing experience while dancing with Freddy. Wow!

After being inundated with today’s high-tech methods of crime solving on TV, it’s fun to read about a time where intuition, detecting skills, and questioning of suspects play such a big part – and where a detective like Sammy can even pocket some evidence from the murder scene! It was also easy to connect with Tracy, a socialite with conscience, caring, and intuitiveness. Tracy’s grandmother, boyfriend, and boss are great secondary characters.

The historical aspect is fascinating, even chilling as Nazi infiltration into America comes to light with things I didn’t know or had forgotten. Solving Freddy’s murder seems pretty routine at first, until things like missing church artifacts and a veil with mysterious healing powers comes to light. I also loved that the story is written from a biblical worldview, with subtle spiritual gems woven throughout.

Peter and Tracy’s romance takes a major step forward, but with much more to come as Peter leaves for war. I enjoyed Swell Time for a Swing Dance and am eager to see where Vincent takes these characters next.

I received a copy of this book from the author. The opinions expressed in this review are entirely my own. 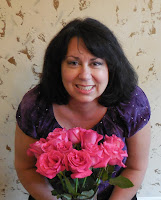 She lives in Houston, Texas with her husband and an assortment of fantastic felines. 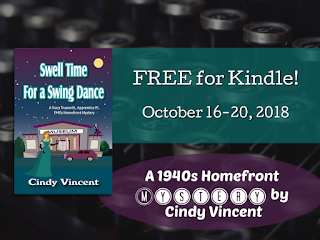 Click on the image above for a free e-copy of Swell Time for a Swing Dance.