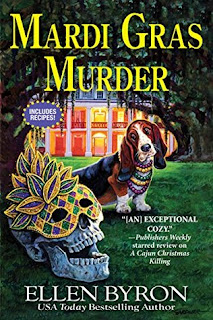 Southern charm meets the dark mystery of the bayou as a hundred-year flood, a malicious murder, and a most unusual Mardi Gras converge at the Crozat Plantation B&B.

It’s Mardi Gras season on the bayou, which means parades, pageantry, and gumbo galore. But when a flood upends life in the tiny town of Pelican, Louisiana—and deposits a body of a stranger behind the Crozat Plantation B&B—the celebration takes a decidedly dark turn. The citizens of Pelican are ready to Laissez les bon temps rouler—but there’s beaucoup bad blood on hand this Mardi Gras.

Maggie Crozat is determined to give the stranger a name and find out why he was murdered. The post-flood recovery has delayed the opening of a controversial exhibit about the little-known Louisiana Orphan Train. And when a judge for the Miss Pelican Mardi Gras Gumbo Queen pageant is shot, Maggie’s convinced the murder is connected to the body on the bayou. Does someone covet the pageant queen crown enough to kill for it? Could the deaths be related to the Orphan Train, which delivered its last charges to Louisiana in 1929? The leads are thin on this Fat Tuesday—and until the killer is unmasked, no one in Pelican is safe.

Mardi Gras Murders by Ellen Byron is simply outstanding, all that a great cozy mystery should be and more. This is the first of the four-book series that I’ve read, but it easily stands alone. I’m eager to read the previous books, however – it’s that good – and I can’t wait to see where Byron takes these characters next.

Mardi Gras Murders is extremely well written with delightful, sometimes quirky characters, great humor, and steeped in the southern charm of the New Orleans area. Pelican, Louisiana was “a community so close-knit that residents occasionally discovered they accidentally married distant cousins.” I was initially a little overwhelmed by the list of characters at the beginning, but it turned out to be very helpful and everyone was pretty easy to keep up with.

Whether working as tour guide at the family plantation, serving as beauty contestant judge, or simply taking care of her grandmother, Maggie is a likeable lead character. For a small town, Pelican sure has a lot going on, especially in preparing for Mardi Gras festivities. Maggie’s dad, Tug, had a great approach to making his famous seafood gumbo … “Some men make their wives crazy all year. I save it for Mardi Gras.”

A lot of the action revolves around the Miss Pelican Mardi Gras Gumbo Queen contest – try saying that real fast! Not long after an unidentifiable body washes up at the back of Maggie’s property, an obnoxious fellow judge is murdered, and everything escalates from there. It was tempting to read fast to discover the solution, but slowing down to savor every page won out – it was that good!

Mardi Gras Murders is a clean read, with no profanity or explicit scenes, and I hope that trend continues. This is a thoroughly entertaining story with surprising depth, and I’m eager for more Cajun Country mysteries.

Ellen Byron authors the Cajun Country Mystery series. A Cajun Christmas Killing and Body on the Bayou both won the Lefty Award for Best Humorous Mystery and were nominated for Agatha awards in the category of Best Contemporary Novel. Plantation Shudders was nominated for Agatha, Lefty, and Daphne awards. Mardi Gras Murder launches October 9th.

Ellen’s TV credits include Wings, Just Shoot Me, and Fairly OddParents. She’s written over 200 national magazine articles, and her published plays include the award-winning Graceland. She also worked as a cater-waiter for the legendary Martha Stewart, a credit she never tires of sharing.