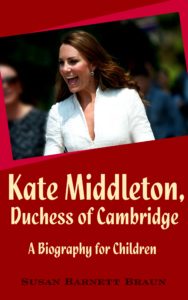 Catherine, Duchess of Cambridge, is known to most of the world as Kate Middleton. She was an ordinary girl on her way to an ordinary life until she met her Prince Charming. Now, she appears on television and in magazines. She wears beautiful, expensive clothing and travels all over the world. One day, she will be Queen of England. But along the way, she was bullied as a schoolgirl and she waited nearly ten years before marrying Prince William.

Learn more about Kate’s road to royalty in this book! Written at Lexile level 930 (same as the Little House on the Prairie books), this book will appeal to girls eager to learn more about the most popular royal since Princess Diana. Full-color photos; timeline that places Kate’s life events into context next to world historical events

“One million Britons lined the London streets,
hoping to catch a glimpse of the royal couple
either before or after the wedding. On television,
two billion  more were glued to the action.”

As one of those two billion people glued to the TV, I enjoyed Kate Middleton, Duchess of Cambridge by Susan Barnett Braun, an excellent biography for children interested in learning details about Kate Middleton’s life and her journey to become the wife of England’s future King. It’s a fairly short book, but very thorough, concise, and easy to follow. While entertaining and informative in itself, it would also make a great educational resource for children.

I have always admired and enjoyed following the reign of Queen Elizabeth II, who ascended to the throne when I was a child. And like many Americans who were later drawn to Charles and Diana, I’ve longed for William and Kate to have a happy marriage. I loved how this book follows Kate from her school years – when a fellow student described her as “ordinary, hard-working, athletic, and easy-going” – through the birth of their third child. Although I was fairly familiar with Kate’s journey, there were some interesting facts that I learned, such as the bullying she experienced at one school and that, at 29, she was the oldest woman to ever marry a future King of England.

I had to laugh at these stats about the college William and Kate attended: “Applications to St. Andrews were up 44% the year the prince started there, and 90% of those extra applicants were female.” The author does a good job at showing a couple who want to be as normal as possible – and, while no lurid details are given, it’s obvious that William and Kate seek to avoid the mistakes of the past.

Susan Barnett Braun earned a BS in retail management from Indiana University and an MA in education from the University of Alabama. She taught for eight years in northeast Indiana, earning a Lilly Endowment Teacher Creativity Fellowship and a National Endowment for the Humanities Summer Study Scholarship.

Susan has had work published in Parents, Children’s Ministry, and The Secret Place. She also writes online for Fort Wayne Visitor’s Bureau and blogs at Girls in White Dresses.

She is married with three wonderful young adult daughters. Susan enjoys reading, playing piano and organ, and spending her time with her family and pets (currently three rabbits and a chinchilla). She has loved the British Royal Family since Diana came onto the scene back in the 1980s.

Back in 1981, as a teenager, I woke early to watch Prince Charles marry Lady Diana Spencer. My fascination with the British royal family began with Diana. As a high school senior, I submitted my senior paper topic: Charles and Diana and the royal romance. My teacher was not amused — but once he read the paper, he did enjoy it and asked to keep a copy.

Over the years, I’ve continued following and enjoying the British royals. When I worked as an elementary teacher, and the next generation of royals came along, I felt that there should be books about Prince William’s wife, Kate. I fondly remembered reading books about Diana when I was younger and felt that today’s girls might be fascinated by Kate in a similar way. I didn’t find many books about Kate, so I decided to write one myself. I learned much while researching Kate (or Catherine, as she prefers to be called). She’s a wonderful role model for girls today in many ways. To name just a few examples: she overcame being bullied by other girls at one of the schools she attended. And, she developed lots of patience during her nine-year courtship with Prince William.

I hope you and the young people in your life will enjoy this biography of the Duchess. 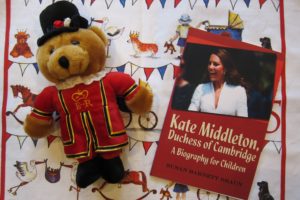 To celebrate her tour, Susan is giving away a grand prize of a paperback copy of the book and a stuffed Beefeater bear!!

Email ThisBlogThis!Share to TwitterShare to FacebookShare to Pinterest
Labels: Non-fiction, YA