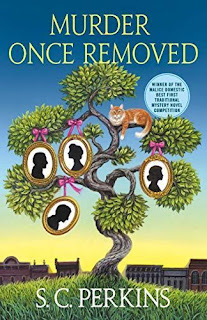 S.C. Perkins’ Murder Once Removed is the captivating first mystery in the Ancestry Detective series, in which Texas genealogist Lucy Lancaster uses her skills to solve murders in both the past and present.

Except for a good taco, genealogist Lucy Lancaster loves nothing more than tracking down her clients’ long-dead ancestors, and her job has never been so exciting as when she discovers a daguerreotype photograph and a journal proving Austin, Texas, billionaire Gus Halloran’s great-great-grandfather was murdered back in 1849. What’s more, Lucy is able to tell Gus who was responsible for his ancestor’s death.

Partly, at least. Using clues from the journal, Lucy narrows the suspects down to two nineteenth-century Texans, one of whom is the ancestor of present-day U.S. senator Daniel Applewhite. But when Gus publicly outs the senator as the descendant of a murderer—with the accidental help of Lucy herself—and her former co-worker is murdered protecting the daguerreotype, Lucy will find that shaking the branches of some family trees proves them to be more twisted and dangerous than she ever thought possible.

With its genealogy theme, Murder Once Removed by S. C. Perkins stands out in the cozy mystery genre. If there are other series with a similar theme, I haven’t seen them, so I enjoyed this fresh approach. Several elements blend together to make a very entertaining and complex read overall – lots of local color and history around Austin, Texas, the field of genealogy, a cold case, and a strong lead character in Lucy Lancaster.

While investigating the family tree of a powerful Texas billionaire, Gus Halloran, Lucy discovers that the apparent accidental death of Seth Halloran in 1849 was actually murder, thanks to a photographer’s journal and daguerreotype. This sets off a chain of events resulting in public accusations, political situations, and the murder of Lucy’s friend. I’m a novice when it comes to genealogical research, so I learned a lot about this science, as well as daguerreotype photographs. The information can be a little detailed at times, but I found it interesting.

There’s a secondary character that I loved, and that’s Lucy’s cat, NPH (Neil Patrick Housecat), who actually plays a pretty big part in this story. The family history and cold-case investigation of two prominent Texas families was also very interesting and easy to follow. As in real life, it’s hard to escape the shadow that the past casts on present day.

As much as I enjoyed this story, two things would have greatly improved the narrative for me. One, I would have liked less emphasis on clothing descriptions, partying, and the guys, as I found myself often skimming over these parts. But most of all, I wish the profanity had been omitted. However, there is much to enjoy in Murder Once Removed and I’d like to see how this series develops.

S.C. Perkins is a fifth-generation Texan who grew up hearing fascinating stories of her ancestry and eating lots of great Tex-Mex, both of which inspired the plot of her debut mystery novel. Murder Once Removed was the winner of the 2017 Malice Domestic Best First Traditional Mystery competition.

She resides in Houston and, when she’s not writing or working at her day job, she’s likely outside in the sun, on the beach, or riding horses.

I am pleased to be able to offer a print copy of Murder Once Removed to one of this blog’s readers. To enter the drawing, please click on this link and share my Facebook post, then leave a comment here - indicating your entry for Giveaway #1.

BE SURE to leave your name and your email address in a safe format - [at] and [dot] - for the drawing. E-mail required for entry. Contest ends at midnight PST on Thursday, March 19. Winner will be chosen by random.org and contacted by e-mail.