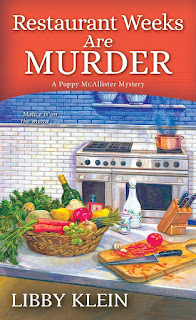 Cape May, New Jersey, is the site of a big culinary competition—and the knives are out . . .

Poppy McAllister is happy about opening a Jersey Shore B&B—but working in a professional kitchen has always been her real dream. Now it’s coming true, at least briefly, as she teams up with her former fiancée, Tim—and his condescending partner, Gigi—during the high-profile Restaurant Week challenge. Poppy’s specialty is pastries, despite her devotion to a Paleo diet. But if anyone can make glorious gluten-free goodies, it’s Poppy.

Things get heated quickly—especially when some ingredients get switched and Tim’s accused of sabotage. Relatively harmless pranks soon escalate into real hazards, including an exploding deep fryer. And now one of the judges has died after taking a bite of Poppy’s cannoli—making her the chef suspect . . .

The dynamic duo of Poppy McAllister and her Aunt Ginny return in the wholly entertaining Restaurant Weeks Are Murder. It’s a clean, light-hearted read with lots of local color from Cape May, New Jersey.  Filled with sparkling humor and rich characterization, this story captured my interest from the first and moves at a steady pace throughout.  From Paleo diet to the most exquisite culinary delights, Poppy’s creative genius shines.  My favorite feline buddy, Figaro, is also very much present, with his cute antics and effective methods for expressing disdain to those who might not care for him. My own cat can suddenly flop over the way he does, but with a softer thud.

Poppy is a strong, appealing leading lady and I adore her. She’s very funny but can easily laugh at herself. Every story in this series has been excellent so far, even though I’m not usually a fan of food-themed mysteries. The restaurant-week competition is fascinating, as each team member is given a mystery basket containing three ingredients and has to create a dish using all of them. A competitive spirit abounds, for success equates with financial gain for their restaurants. From contestants to judges, the characters are interesting and quirky, many with egos a mile high.

The mystery plot itself is well crafted and not easy to solve, at least for me. But my favorite part of this story is its humor. In fact, I wish I could meet the author, because she would certainly bring much joy and laughter into my life. Romance isn’t a major theme, but the love triangle between Poppy, Gia, and former fiancée Tim continues. I hope this resolves itself soon, because I don’t enjoy triangles, but this is no way lessens my enjoyment of this series.