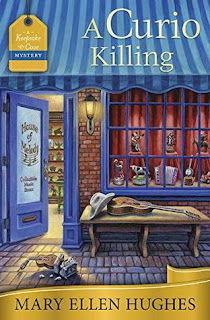 Callie finds trouble in Keepsake Cove when her ex-boyfriend is framed for murder . . .

Callie Reed is looking forward to her first Keepsake Cove spring festival. But her excitement dims considerably when she learns that her ex-boyfriend, Hank, will be performing with one of the hired country-western bands. Callie vows to keep her distance, but that changes when the band’s manager, Bobby Linville, is found dead, killed with the music box Hank bought at Callie’s shop.

Hank is soon singing a sad tune in a detention center with Callie his only lifeline. Though thoroughly aware of his many faults, she knows violence and murder aren’t in his blood. But that means one of her fellow Keepsake Cove residents must be hiding a dark secret—something Callie desperately needs to uncover.

It’s fun to pick up a book that draws you back into a setting and characters that you already know and feel comfortable with, as is the case with A Curio Killing, book #3 in the Keepsake Cove series. Mary Ellen Hughes delivers a well-crafted traditional cozy mystery that is sure to delight readers who enjoy this genre. If you’re new to this series, it works well as a standalone.

With its quaint shops and seasonal festivals, Keepsake Cove is easy to visualize. Callie is a likeable lead character, easy to connect with. A Curio Killing is a seamless blend of setting, characters, and mystery. As the spring festival is about to begin, Hank, Callie’s ex, unexpectedly bursts on the scene and soon finds himself arrested for murder. In spite of all the grief Hank brought into Callie’s life in the past, the Hank she knew would never be guilty of murder and she feels obliged to prove his innocence.

Strong secondary characters add richness to the story – such as Callie’s suspense author friend, Lyssa, store clerk Tabitha, and romantic interest, Brian – with Delia’s reaching out to help her photographer friend, Jill, being one of my favorite parts. And, of course, there’s Grandpa Reed’s music box that starts playing at crucial times in Callie’s life.

I greatly enjoyed the previous two books in this series, A Fatal Collection and A Vintage Death (please click on titles to see my reviews). But while A Curio Killing is well written and I loved spending time with these characters, I didn’t enjoy this story quite as much. This is purely personal, but I think it was because I didn’t care for Hank and felt that Callie defending him put her relationship with Brian at risk. Also, Tabitha’s quirky dress ensembles, where everyone tried to guess what famous or historical character she emulated each day, didn’t play as prominent a role in this story and I missed that funny, whimsical touch. A Curio Killing is still a good read overall. This is a strong series and I look forward to future Keepsake Cove stories.

Mary Ellen Hughes is the bestselling author of the Pickled and Preserved Mysteries, the Craft Corner Mysteries, and the Maggie Olenski Mysteries, along with several short stories. The Keepsake Cove series begins with A Fatal Collection and continues with A Vintage Death and A Curio Killing.