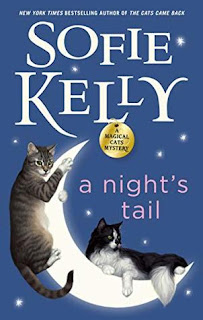 Librarian Kathleen Paulson’s brother, Ethan, and his band, The Flaming Gerbils, are spending some time in Mayville Heights. Ethan and his band-mate, Derek, are giving a song-writing workshop at the St. James Hotel when they stumble upon the body of Lewis Wallace. The former football player was considering the town for the site of his newest business venture.

However, not everyone was a fan of the brash ex-athlete, who had a failed business, some disgruntled customers, and several lawsuits in his past. Did he make a new enemy, or did Lewis Wallace’s past finally catch up with him? It’s up to Kathleen—with some furry assistance from her talented cats, Owen and Hercules—to figure out who was trying to settle the score.

There’s so much to adore in A Night’s Tail, Sofie Kelly’s charming new release in the Magical Cats series! I quickly became immersed in this story and enjoyed every minute spent with Kathleen and her “special” cats, Hercules and Owen. Characters are well drawn, the writing flows smoothly, and the cats have me wrapped around their little paws. I hope there will be many more stories to enjoy in this series.

Kathleen is an intelligent, caring leading lady, easy to connect with. I love her strong network of family and friends. Her brother, Ethan, plays a large part in this story, as does his band. There’s lots of characters – and suspects – but I was able to keep them straight, even without having read every one of the previous novels in the series.

I loved two things that are different from most other cozy mysteries that I read. One, Kathleen’s boyfriend, Detective Marcus, never gets upset at her involvement in the investigative process. Kathleen is smart, thinks before acting, and there’s a mutual respect between them in addition to some sweet chemistry. Secondly, Kathleen doesn’t act foolishly and put herself in dangerous situations. All this makes for such pleasant reading!

The action begins when several characters are gathered for an evening out at The Brick and witness a drunk attacking a Veteran’s service dog. The drunk, later a murder victim, turns out to be a man who is planning on opening a business in their lovely town of Mayville Heights, Minnesota. Shady business practices might be involved, as well as a past history. Kathleen’s involvement stems from her concern that Ethan might have some connection to the events. The mystery theme is logical, well-paced, and I enjoyed watching everything unfold.

While I don’t usually care for fantasy, it works well in this story. Kathleen talks to her cats; I talk to my cats! And a cat’s movements are so quick and unexplained that Owen’s disappearing in front of your eyes and the ability of Hercules to walk through walls don’t seem all that far-fetched. I also loved that Marcus has adopted a kitten that just might have some “special” ability as well.

A Night’s Tail is thoroughly enjoyable and I look forward to many more adventures with these characters – and Hercules and Owen, of course.