Review + GIVEAWAY: The Bridge Between by Lindsey Brackett 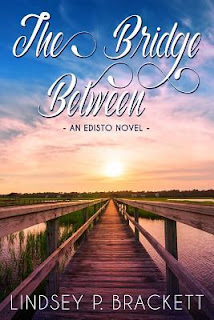 The Bridge Between
By Lindsey P. Brackett
Edisto series #2
Firefly Southern Fiction a division of Lighthouse Publishing of the Carolinas, 2019

Louisa Coultrie Halloway has returned home as caretaker for the family home on Edisto Island, but years before she left this world behind. Now she flounders to find her place. When Liam Whiting, a local professor studying tidal creek preservation, invites Lou to join his research team, she welcomes the opportunity for purpose.

David, her ex-husband, has followed Lou and their children to Edisto. As he finds his footing in this new life, their once strained relationship eases into a familiar rhythm—and he hopes for more.

But the past still has a hold on them all, especially in the presence of Grace Watson, whose son intends to marry Lou and David’s daughter. Somehow, Grace and Lou must let the past of a shared love settle between them.

In this idyllic setting, relationships, like the creeks, deepen and shift. Once more, Lou finds herself caught between the life she’s chosen—and the love that might be meant to be.

The Bridge Between is a story that I never wanted to end, and it is definitely one of my favorites. Lindsey P. Brackett, who excels in the southern fiction/women's fiction genre, has written a story steeped in atmosphere, complex characters, and sweet second-chance romance. Sufficient background is given so that this story can stand alone, but for the fullest understanding of relationships, it’s best to have read the previous Still Waters.

The author’s personal experience and love for South Carolina’s Lowcountry infuses the story with vibrancy and captures every distinctive nuance of Edisto Island. Southern fiction has always held a strong appeal for me and I loved being enveloped in this setting that literally becomes a main character. It is an essential part of the characters – their jobs, everyday life, and the setting for all their past baggage.

While The Bridge Between has the elements of a second-chance romance, it’s more of a relationship drama, filled with richly-drawn characters who carry the baggage of past mistakes. This is mainly Lou and David’s story, divorced parents of Cora Anne who was featured in the previous book. Lou and David have returned to Edisto Island – Lou with her three boys, seeking where she belongs, and David with a heart for rebuilding their marriage. A strong secondary character who I loved is Grace, widow of Patrick, Lou’s first love – and mother of Cora Anne’s fiancé, Tennessee. A dual timeline is seamlessly blended throughout, giving a glimpse into the early years and providing a foundation for the present-day storyline. I loved that the main characters are older, with realistic struggles that make them so relatable.

The Bridge Between is a well-written, inspirational story of forgiveness, grace and reconciliation. I long for many more stories featuring the families of Edisto Island.

Lindsey P. Brackett writes southern fiction and cooks big family meals, but she complains about the dishes. Her debut novel, Still Waters, released in 2017 and was named the 2018 Selah Book of the Year. Her latest novel, The Bridge Between, released in 2019.
Someday she hopes to balance motherhood and writing full-time. Until then, she’s just very grateful for her public school system.
Connect with Lindsey and get her free novella, Magnolia Mistletoe with newsletter signup at lindseypbrackett.com.

10 Behind the Scenes Facts about the Still Waters

1. My grandparents actually met on a back road in Colleton County in the 1940’s. She was lost and he was bundling pine straw to sell. So that story inside the story is true.

2. McConkey’s Jungle Shack—and they’re not kidding about the shack part—really does have the best fish tacos on the coast.

3. Late in Still Waters, I reference a story about soldiers mistaking a loggerhead turtle for an enemy when the beach was being used as a lookout during WWII. This really happened and you can read about it in Nell Graydon’s Tales of Edisto, which I used for both reference and inspiration.

4. We drive a blue minivan and it’s kind of well-known because the paint job was bad (thanks Honda) and we’ve never spent the money to fix it. So my best friend begged me to put the blue van in the story. It’s there, when Cora Anne and Nan stop at King’s Market, complete with a passel of kids. (I have four of those.)

5. I buy and eat a whole King’s Market key lime pie every time we go to Edisto.

6. My cousin Heather and I were born 18 hours apart, and our moms are sisters. Yes, she inspired Cora Anne’s cousin, Hannah. When we were kids at Edisto, we always hunted for sharks teeth and snail shells so we could make necklaces with our grandmother.

7. The book is set in 2006 because I wanted a time period before social media’s invasion and before BiLo bought out the Piggly Wiggly. Edistonians are not coming around. They still call their only grocery store The Pig.

8. The Edisto Island Open Land Trust is a gem I stumbled upon while researching what made the most sense for Tennessee’s philanthropic spirit. The EIOLT was the perfect fit since it’s all about preservation of the Island’s natural beauty, while empowering home owners to still be able to afford family property that’s been passed down for generations. The executive director, John, drank coffee with me one morning at the Edisto Coffee Shop and told me so much valuable information.

9. Botany Bay (and that’s the Botany sentinel tree on the Still Waters cover) was nearly destroyed by Hurricane Matthew in 2016. Edisto took the brunt of the storm’s hit and the eye passed over the island. When the beach pushed inland, the entire first row of houses were left standing in water. But the community there is strong and resilient. They’ve been rebuilding and regrouping. The beaches will never look the same, but as my mama says, “That’s nature. And life. Storms come and you have to deal with the aftermath.” Or, as Tennessee puts it in the story, “Sometimes a storm’s what clears out the junk…”

10.  Edisto Beach still has a video store, probably the last one left in the country. It’s also one of two places in the town to get ice cream—unless you’re sitting on your own porch enjoying the ocean breeze and listening for the churn to slow down.

Check out the tour schedule HERE.