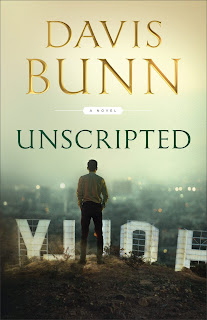 Line producer Danny Byrd is well known in Hollywood for being someone who gets things done on time and under budget. But when his reputation takes a beating after his partner--and former best friend--makes off with their investors' money, Danny has but one chance to redeem himself and restore his ruined career.

LA lawyer Megan Pierce has sacrificed years of her life proving herself to impossible bosses, only to find herself disgusted at their snobbery and their specious business practices. When an opportunity to actually make a difference comes her way, she knows she has to grab it--even though she's not entirely clear what "it" is.

Davis Bunn is a talented author with the ability to write in several different styles or genres. A drama like Unscripted is my favorite type and I thoroughly enjoyed this story, even though the setting – Hollywood – isn’t one that I like. My attention was engaged from the unusual beginning, which finds the lead character, Danny, in jail for a crime his business partner committed – betrayed and with both his business and good name virtually destroyed.

Bunn’s writing is excellent, as always, and his characters are rich. Megan is an attorney, smart and hardworking, who has given all that she had to please her hard-to-please bosses, only to become disillusioned with their attitudes and practices. Attraction between Danny and Megan slowly builds, but is secondary to the overall plot.

I really don’t care for Hollywood or buy into the whole “celebrity” thing, so for me to enjoy this story so much is a tribute to Bunn’s writing and characterization. The doors are thrown open wide and we gaze upon the realities of the film industry – propelled pretty much by money and power. Danny is a rare breed in this setting, a truly good and honest guy. I was especially drawn to the teenager, Emma, and her incredible talent.

I also have to mention the book’s cover, for the design team totally got it right. I didn’t pay much attention to the cover at first, but as I got into the story, I found myself staring at it every time I picked the book up. The greens and golds, Danny’s position behind the lettering as he gazes at the misty city lights – all combine to beautifully capture the story’s mood. Davis Bunn spins a fascinating story, redemptive with its subtle themes of forgiveness and letting go of the past. 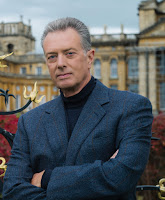 Davis Bunn (www.davisbunn.com) is the award-winning author of numerous national bestsellers with sales totaling more than seven million copies worldwide. His work has been published in twenty languages, and his critical acclaim includes four Christy Awards for excellence in fiction.
Bunn is a Writer-in-Residence at Regent's Park College, Oxford University. He and his wife, Isabella, divide their time between England and Florida.