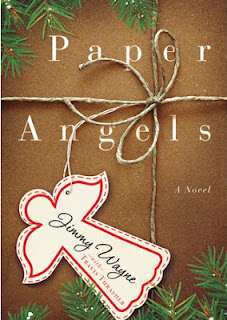 
"Paper Angels," co-written by country singer Jimmy Wayne and author Travis Thrasher, is a character-driven novel with two intertwined stories about family life and hard times, set against the backdrop of hope in which the Christmas season specializes.


Kevin Morrell, a businessman whose company is struggling to survive during a poor economy, takes a paper angel from The Salvation Army's Angel Tree in a crowded mall at his wife's urging.  The name on that ornament is Thomas Brandt, a teenager from a broken home, living with his mom and sister in a rented trailer after fleeing from his abusive father.  This paper angel links the man and boy together and begins a chain of events that changes not only their lives, but those around them.

I found "Paper Angels" to be very enjoyable, thought provoking and touching.  The novel goes beyond the middle-class family who takes an ornament to look on the other side at a family who finds themselves in poverty.  Each family encounters The Salvation Army Angel Tree and has a unique experience with it.  There's also a surprise twist at the end that I didn't see coming, one which exemplifies humility, giving and hope.


Kevin has always been a worrier, seeing the negative side of things.  Even as he watches the business he has built slowly deteriorate, he also learns that one of the twins his wife is expecting may not survive.  Having drifted away from his faith in God's provision, fear is utmost in Kevin's thoughts:  "Fear seemed to know his name and know it well.  It had breakfast with him and texted him throughout the day and liked to ride home with him in the evening.  It hung around even when he tried his best to get rid of it and when he camouflaged it with witty quips" (p. 197).


"Paper Angels" is a well-written, character-driven story by Jimmy Wayne and Travis Thrasher.  Jimmy Wayne survived a childhood similar to that of Thomas Brandt in the story, and experienced The Salvation Army Angel Tree program as he grew up.  I was also glad to read on Jimmy Wayne's website that Hallmark will produce a movie version of his book.


"Paper Angels" could easily become a Christmas classic and I highly recommend it to all who enjoy inspirational fiction.
Posted by Carole at 9:29:00 PM