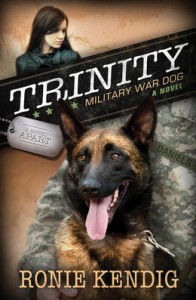 Trinity: Military War Dog is the first book in Ronie Kendig's A Breed Apart series.  Set in the mountainous country of Afghanistan, this novel is a military suspense story which introduces us to a war hero that most of us know little about, the Military War Dog (MWD).


The story begins two years after an injury left Heath "Ghost" Daniels with a traumatic brain injury and ended his combat career.  Unable to get back into the action he craves and lacking self-confidence, Heath and his MWD Trinity join A Breed Apart, a private organization that uses retired war dogs and their handlers in motivational PR situations, etc.  When Military Intelligence officer Darci Kintz is kidnapped, Heath and Trinity are pulled into the rescue operation, made even more difficult by the rugged Afghan terrain and often treacherous weather.

All things considered, I should not have enjoyed this novel.  I don't particularly like war stories set in the Middle East, I'm a cat person, and suspense is not my favorite genre.  However, Ronie's books are so highly rated that I decided to try one, and am very glad that I did.


Well researched and with character depth, this novel held my interest throughout.  Contrary to my fears, I had no difficulty keeping the characters straight.  And I came away with a whole new appreciation for what our military men and women go through around the world, as well as their commitment and courage.  Darci's bravery in the face of torture was very moving.


But what endeared this novel to me was Trinity and other highly-trained dogs like her.  There's a natural bond between dog and master, but the bond between dog and handler rises to a level I doubt anyone outside of the relationship could understand.  "That was a story he (Heath) didn't deserve, the undying loyalty and devotion of a creature with a pure heart."  And later:  "Trinity would keep working till her last breath if it meant completing the task he'd given her. . . . For him, it was a mission to honor his country, to do his best.  For her, it was also a mission to do her best, but she lived for one goal: to please him.  Loyal, brave . . ."


The romance between Heath and Darci was sweet, but happened too quickly to feel natural to me.  And there were parts that moved slowly, with repetitious descriptions of thoughts and feelings, "telling" rather than "showing."  But the plot, characterization and war dog theme made this a very enjoyable read for me.


I appreciate Ronie focusing a series on these true heroes and I recommend Trinity: Military War Dog to all who enjoy inspirational suspense/military fiction.

This book was provided by Barbour Publishing through Net Galley in exchange for my honest review.
Posted by Carole at 9:54:00 PM