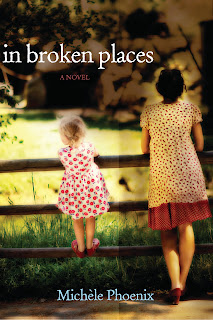 In Broken Places by Michele Phoenix is one of the most memorable novels I have ever read. Michele weaves the emotion of heartbreaking drama with laugh-out-loud dialogue and tender romance in a novel that never fails to inspire. With beautiful prose, idyllic setting, and humor never far from the surface, this story of a family's suffering and triumph will entertain every reader.

Shelby’s life isn’t glamorous, but it is predictable—and that’s the way she likes it. A survivor of her father’s violence, she has spent a lifetime creating a safe existence devoid of dependence. But her carefully managed world begins to break when, under staggering circumstances, she becomes a single mother to four-year-old Shayla. In a drastic attempt to escape her childhood’s influence, Shelby moves to Germany, but she quickly discovers how intimately linked memory and healing are—and how honestly she must scrutinize her past in order to aspire to a richer future. As she juggles a new job, a new culture, a new daughter, and the attention of an enterprising man, Shelby’s fresh start becomes a quest for the courage to be not only a survivor, but someone who prevails.

In Broken Places is a book that succeeds on all levels and its characters will stay with me for a long time.

Having been privileged to visit close family living in Germany, it was the book's setting that first caught my attention. The southwestern German town of Kandern is the home of Black Forest Academy, a boarding school for children of missionaries from around the world, and it is in relocating there to teach that Shelby begins her new life. Michele beautifully brings out the cultural rituals - such as morning trips to the bakery and recycling ("Every Sunday around 7:00 p.m., identical shiny black garbage cans appeared on the curbs, their contents devoid of plastic, glass, and paper"), as well as the fact that loud talking is frowned upon. Visits to the Christmas market in Gengenbach, castle ruins at Sausenburg, and a toy museum in Riedlingen also add local color and richness.


The characters are drawn with great depth and complexity, and I quickly came to care about each of them. Scarred from years of abuse and living with the fear that they might have inherited their father's "bad" genes, Shelby and Trey develop a close relationship and protectiveness for each other. Shelby reflects that Trey was "my anchor, my defender, my friend. He was the eight-year-old boy who patted my back and dried my tears, the twelve-year-old rescuer who convinced me we'd be fine, the sixteen-year-old knight who promised to make it better, and the thirty-six-year-old champion who persuaded me that this latest assault would not shatter me either."

As someone who liked to be in control, never wanted children, and was a master at erecting walls, Shelby's "safe" world is shattered when sweet Shayla comes into her life, but an unbreakable bond of love is quickly established. One night Shelby picked her up and she "wrapped her legs around my waist and both her arms around my neck and held on tight. And we walked home like that, me embracing her and her embracing me, me rescuing her and her rescuing me. And the sun setting over Kandern seemed just a little redder somehow."

The romance between Shelby and Scott, a coach at the academy, is sweet, tender, and beautifully portrayed. Spiritual themes are also skillfully woven into the narrative. Shelby's spiritual journey is reflected in these words:  "Though the consequences of my father's depravity were still mine to bear, I know that God had been faithful. And it was because he'd been there that the horror had been survivable."

Another integral storyline is the academy's play, Shadowlands, which depicts the love between C. S. Lewis and a dying Joy Gresham. Seth, cast in the role of C. S. Lewis, delivers this monologue at the end:  "God loves us, so he makes us the gift of suffering. Through suffering, we release our hold on the toys of this world, and know our true good lies in another world. . . . The suffering in the world is not the failure of God's love for us; it is that love in action. For believe me, this world that seems to us so substantial is no more than the shadowlands. Real life has not begun yet."

"My sincerest prayer is that the pages of this book will shed a compassionate light on the ravages of child abuse, its soul-crippling tyranny and deep-rooted legacy. Pain need not win. There is life beyond bleeding. There is love beyond fearing. There is hope beyond despairing. I should know . . .
"I am a survivor."

A review can hardly do justice to this beautiful, unforgettable story; it must simply be experienced. I highly recommend In Broken Places to all readers.

This book was provided by Tyndale House in exchange for my honest review.
Posted by Carole at 12:44:00 AM