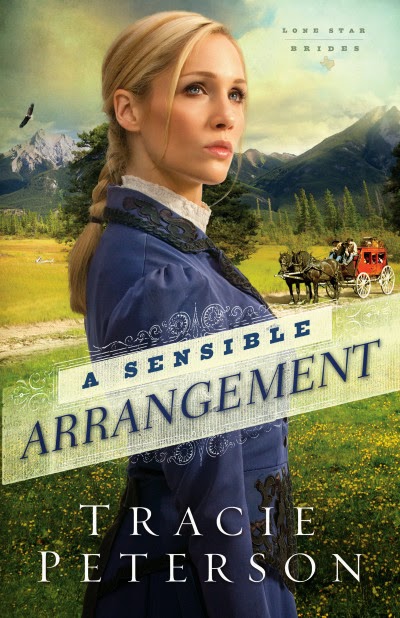 Marty Dandridge Olson is ready to leave behind the pain of the past. Answering an advertisement for a “Lone Star bride,” she leaves her Texas ranch and heads to Denver to marry a man she doesn’t know.

Jake Wythe is the man waiting for her. Burned by love, he marries now simply to satisfy the board of Morgan Bank, which believes a man of his standing in society should be wed. Together Jake and Marty agree they are done with romance and love and will make this nothing more than a marriage of convenience.

When missing money and a collapsing economy threaten his job, Jake’s yearning to return to ranching grows ever stronger, much to Marty’s dismay. But a fondness has grown between them, as well, further complicating matters.

What will happen when their relationship shifts in unexpected ways… and dreams and secrets collide?

I can't imagine anyone who likes historical romance not enjoying Tracie's newest, A Sensible Arrangement, book #1 in the Lone Star Brides series. The story opens in Texas on December 24, 1892, but quickly moves to Denver. It was a time of economic crisis for the country, and I think one of the book's strengths is the way Tracie does more than merely set her story against a certain historical backdrop, but weaves characterization and plot into the actual events. I loved how we are introduced to some of Denver's banking royalty - like John Brown, Charles Kountze, and Jake's boss, bank manager Paul Morgan (relative of financier J. Pierpont Morgan).

This series loosely ties in with two earlier series - Striking a Match and Land of the Lone Star. Tracie writes:  "I had a lot of readers who wanted to know more about a couple of characters from each series and so I thought it would be great fun to marry them and see what happened." I have not read either of these series, but had no problem keeping up with the characters in A Sensible Arrangement. I will say, however, that now I want to read these earlier series!

Character depth was good, although much of the story is told from Marty's point of view and I longed to know more about Jake. Jake wanted a marriage in name only, which was a requirement for his position as bank manager, yet he longs to return to ranching in Texas. He later reflects:  "It seems all my life I've been trying to please someone rather than figure out what God desired for me in the first place."

Marty is an interesting character that I came to love, probably because she has obvious flaws that most of us can relate to - and yet she has such a caring side when it comes to orphans and the homeless. A widow known for her spunk and ingenuity, lying seems almost second nature to her, and she is determined to "do her best to ingratiate herself with Denver's finest and prove to Jake that they belonged right where they were."

"God isn't in the business of doing things without
them having a purpose that will lead to His glory."
- Alice

No one can doubt that A Sensible Arrangement is Christian fiction, and the story's strong spiritual theme is another strength in my opinion. I mean, how often do we see words like "sin" and "lie" used, even in Christian fiction? And themes of prayer, repentance and forgiveness? I love this quote:  "Lies had always come easily to her, and if not lies, then omissions of truth or exaggerations. . . . Marty didn't see it as a truly sinful thing. At least not until now. Now she could see the full implications of this sin. She could see the potential damage and pain it would cause."

The servants are delightful in this story, especially Marty's maid, Alice. It is through their growing friendship that we see the effect of Alice's sincere faith upon Marty. A Sensible Arrangement comes to a satisfactory conclusion, but there is obviously much more to come. I believe the next book, A Moment in Time, will continue with Alice's story.

It has been a good while since I've read one of Tracie's books, and while I always enjoyed them, I think her writing has greatly improved. I am eager to continue this series and strongly recommend A Sensible Arrangement to all who enjoy inspirational fiction.

Tracie Peterson is the award-winning, best-selling author of 100 novels, both historical and contemporary. She has always felt called to some form of ministry, and writing fulfills that mission field.
Peterson published her first book in 1993 and has co-written with a variety of authors including Judith Pella, Judith Miller, James Scott Bell, and her daughter Jennifer. Having a special heart for new authors, she frequently speaks to writers’ conferences.
Her avid research resonates in her stories, as seen in her bestselling Heirs of Montana and Alaskan Quest series. Tracie and her family make their home in Montana.

Meet Tracie online at www.traciepeterson.com or Facebook. Also visit the Litfuse blog tour post to learn more. Book #2, A Moment in Time will be available in June followed by the release of A Matter of Heart in October.

Thank you to Litfuse Publicity for providing a copy of this book in exchange for my honest review.
Posted by Carole at 6:40:00 PM