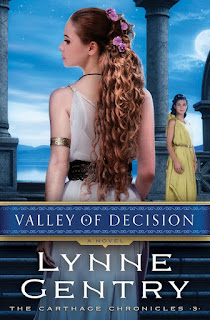 Valley of Decision
By Lynne Gentry
The Carthage Chronicles, #3
Howard, 2015

Every choice has a consequence in the explosive conclusion to the Carthage Chronicles as Lisbeth returns to third-century Carthage for a thrilling final adventure.

Thirteen years ago, Lisbeth made an impossible decision—leave third-century Carthage and her husband Cyprian behind for good. She knew it was to protect her daughter Maggie, so Lisbeth gathered the strength to move on with her life.

All these years, Lisbeth has thrown herself into her work and raising her headstrong daughter, all to live up to the promise she made to Cyprian. But Maggie is sick of being protected. In an act of teenage rebellion Maggie decides to do what her mother can’t—secretly returning to the third century on a quest to bring her father back, leaving Lisbeth no choice but to follow.

With Maggie’s surprise arrival in Carthage, chaos ensues. She finds her grandmother on trial for murder and attempts to save her, but instead the diversion sparks a riot that nearly destroys the plagued city. Only one thing will appease the wrath of the new proconsul of Carthage: the death of the instigator.

Will Lisbeth arrive in time to save her daughter from the clutches of Rome? How can God possibly redeem such a slew of unwise decisions and deep regrets? Filled with heart-wrenching twists and riveting action, Valley of Decision brings the romantic adventure epic, The Carthage Chronicles, to an electrifying conclusion.

It’s hard to talk about Valley of Decision apart from the whole Chronicles of Carthage series, for each story builds from book #1, Healer of Carthage (click on title to see my review). This series is so far out of my comfort zone that it’s not even funny, for I don’t care for time travel or ancient Rome settings – yet I enjoyed and was moved by each story. While containing the entertaining elements of rich historical detail, well-developed characters, passionate romance, and action-adventure excitement, it was the spiritual depth that won’t let me forget this series.

Valley of Decision focuses on Lisbeth’s daughter, Maggie – impulsive, headstrong, a product of the 3rd century who grew up in the 21st century. Maggie’s growing up years in Dallas have been mere hours in Carthage time, and this story begins shortly after the conclusion of book #2, Return to Exile. Not only is each story well researched, but Lynne has a gift for conveying a sense of place, for I could feel the very essence of a Rome that placed little value on human life - and I almost came to believe that time travel could be a reality!

Valley of Decision shines the spotlight on Christians ministering as Christ taught during a season of great persecution. In a time where political leaders sought to destroy the church, Valley of Decision shows imperfect Christians reflecting the love and humility of Christ – and elements of this story seem uncomfortably similar to areas of our world today. Always thought provoking, it makes me wonder if I would be as courageous as these 3rd century Christians.

The character of Cyprian, who really comes alive in Lynne’s hands, is loosely based on a historical figure. I had so much respect and admiration for Cyprian and loved the tender romantic elements between him and Lisbeth. With a faith that had been tried and tested, he had a peace about his purpose, that of rallying and unifying a fragmented church.

It’s easy for us to look back on history and wish we could change events, but as Lisbeth came to realize, removing even one thread from the tapestry of our lives would change the essence of who we are. I appreciate the reality of this story and believe Lynne chose to conclude it in the only way possible – heart-wrenching on the one hand, victorious and inspiring for the ages on the other.

In her notes at the back, Lynne shared words that Cyprianus Thascius penned for a friend, and I wanted to end with this quote about Christians:

“They have discovered a joy which is a thousand times
better than any pleasures of this sinful life.”
- St. Cyprian

I’m glad Lynne was inspired by Cyprian’s life and shared him through this series. Recommended to all who enjoy inspirational historical fiction. 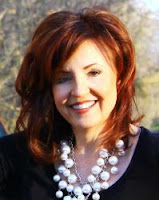 Lynne Gentry has written for numerous publications. She is a professional acting coach, theater director, and playwright. Lynne is an inspirational speaker and dramatic performer who loves spending time with her family and medical therapy dog.