Review: I Hope You Dance 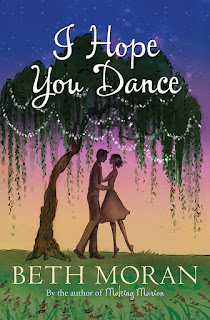 I Hope You Dance
By Beth Moran
Kregel/Lion Hudson, 2015

Ruth Henderson has moved back in with her parents--something she swore she would never do, especially not at the age of thirty-three. But in the face of the mountain of debt left by her late partner, and the fact that her teenage daughter, Maggie, is expressing her grief through acts of delinquency, there was really only one option.

Returning to a house Ruth swore never to set foot in again is bad enough. Add to this an estranged father, whirlwind mother, and David--the boy next door who broke her heart--and it is little wonder Ruth can barely make it out of bed.

But then, reunited with her old friend Lois, Ruth is persuaded to go along to a monthly girls' night. Here she meets a bunch of incredible women and for the first time since leaving home at eighteen, Ruth begins to make some genuine friends.

She also has her first ever date--with the charming Dr. Carl Barker. However, after a disastrous dinner, and an upset Maggie still struggling with her father's death, Ruth promises her daughter she won't go out with any other men. A promise she quickly regrets when David, the boy next door, asks her to dance. . .

I Hope You Dance is a wonderful book and I am thrilled to have discovered the writing of Beth Moran. Filled with realistically flawed, often quirky, yet loveable characters, this is a story about relationships – broken and strained relationships, healing, forgiveness, and genuine friendships. There’s tender romance, suspense, poignancy, and laugh-out-loud humor woven throughout.

Faith-based British fiction is a little different than the more conservative style that Americans are used to. For instance, off-color dialogue pops up occasionally and the use of alcohol is prevalent, though not excessively. However, I expected this going in and it didn’t lessen my enjoyment of this great story.

I have always been a fan of British fiction, and loved being transported to the small town of Southwell, England. The cover made me think this would be a lighthearted romance, but was I in for a surprise! The romance between David and Ruth is enchanting, but there’s so much more. It’s easy to think of themes:  relationships, friendship, giving, and dance – both literal and figurative.  Readers will be able to relate to Ruth’s character and I was immediately drawn to her. Not only did she live with the guilt of a youthful mistake, but she kept punishing herself for of it. In Ruth’s words, “I had abandoned everything my mother had taught me and spent my entire adult life settling and making do. I had not strived, fought, adventured, embraced, journeyed, dared, been inspiring or inspired. I had barely laughed.”

The strength of this novel is the development of various relationships – with family, friends, and God – and it’s moving to walk with these characters as they grow.  In the part where Ruth’s father tried to help by giving her some money, I loved her reasoning for hesitancy:  “Was it okay to cash in five-thousand pounds’ worth of guilt money, if the person was right to feel guilty? If you took the money, did that mean the debt was paid, they were forgiven, and you couldn’t feel mad at them anymore?”

Some of the things I found especially touching was the group of Christian women who regularly met for girls’ night out, the “yurt” weekend they put together for a couple who needed time away from their kids, and the befriending of senior adults.

I also want to give an example of one of the best parts of this story, and that is Beth’s lyrical writing style. In an emotionally healing scene where Ruth danced with her father, "we were trying not to slip in the waterfall of tears that gushed from our pathetic eyes and formed a lake of wasted time and stupid regrets on the wooden floor between our feet.”

Everything comes to a very satisfying conclusion, but I literally hated to turn the last page and leave these characters. Highly recommended. 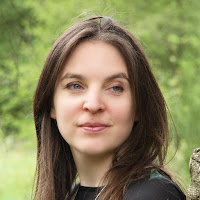 Beth Moran has a background as a research scientist and adult educator. She now concentrates on church work and is part of the national leadership team of the UK women's network Free Range Chicks. She is married with three children and lives in Nottingham, England.

Thank you to Kregel/Lion Hudson for providing a copy of this book in exchange for my honest review.
Posted by Carole at 2:01:00 AM