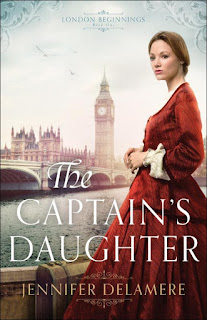 When a series of circumstances beyond her control leave Rosalyn Bernay alone and penniless in London, she chances upon a job backstage at a theater that is presenting the most popular show in London. A talented musician and singer, she feels immediately at home and soon becomes enthralled with the idea of pursuing a career on the stage.

A hand injury during a skirmish in India has forced Nate Moran out of the army until he recovers. Filling his time at a stable of horses for hire in London, he has also spent the past two months working nights as a stagehand, filling in for his injured brother. Although he's glad he can help his family through a tough time, he is counting the days until he can rejoin his regiment. London holds bitter memories for him that he is anxious to escape. But then he meets the beautiful woman who has found a new lease on life in the very place Nate can't wait to leave behind.

It’s always fun to try an author who is new to me when their book descriptions sounds like something I would enjoy – and enjoy I certainly did! The Captain’s Daughter is filled with well-rounded characters and vividly conveys the sights and sounds of Victorian London. I loved the historical detail, which included the theater world of Gilbert and Sullivan. I’ve long been addicted to British fiction and found this story very satisfying.

The prologue introduces us to Rosalyn and her two sisters, all raised in George Muller’s orphanage. I’ve read a good bit about Muller’s devout trust in God to provide, and think this is a great foundation for the girls’ stories. Rosalyn’s sisters have distinctive characteristics, making it fun to anticipate their future stories.

That faith in God’s provision is tested when Rosalyn finds herself penniless upon reaching London, and I liked the way God worked through the people who reached out to help her. It was easy to like Rosalyn and one thing that stood out to me was her simple kindness, even when things weren’t easy for her.

I connected with Nate immediately – honorable and hardworking, attempting to handle guilt in his own way … “Never once had Nate gone to God to ask for forgiveness. He’d been too intent on earning it.” He’s a great leading man and I enjoyed watching the relationship between Rosalyn and Nate grow from friendship into much more. The musician in me loved that he played the fiddle, and Ms. Delamere writes some beautiful scenes where I could almost hear his tunes echoing off the walls around me.

Although Rosalyn is truly a sea captain’s daughter, it was hard to connect with the title at first because her father wasn’t in the picture. However, there’s a scene toward the end that made me realize it was the perfect title.

The Captain’s Daughter was entertaining, a story that should appeal to fans of historical romance. I look forward to Julia’s story and its courtroom theme in The Heart’s Appeal, which releases March 2018.

I was provided a free copy of this book through Litfuse Publicity and Bethany House. The opinions expressed in this review are entirely my own. Jennifer Delamere's debut Victorian romance, "An Heiress at Heart," was a 2013 RITA award finalist in the inspirational category. Her follow-up novel, "A Lady Most Lovely," received a starred review from "Publishers Weekly" and the Maggie Award for Excellence from Georgia Romance Writers.

Jennifer earned a BA in English from McGill University in Montreal, where she became fluent in French and developed an abiding passion for winter sports. She's been an editor of nonfiction and educational materials for nearly two decades, and lives in North Carolina with her husband.