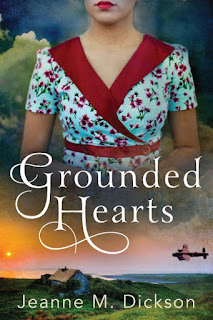 A brave midwife. A wounded pilot. A risky secret.

In the midst of World War II, Ireland has declared herself neutral. Troops found on Irish soil must be reported and interned, no matter which side they are fighting for. When midwife Nan O'Neil finds a wounded young Canadian pilot at her door, she knows she's taking a huge risk by letting him in. Not only is she a widow living alone, but if caught harboring a combatant, she'll face imprisonment.

Still, something compels Nan to take in "flyboy" Dutch Whitney, an RAF pilot whose bomber has just crashed over County Clare. While she tends to his wounds and gives him a secret place of refuge, the two begin to form a mutual affection-and an unbreakable bond.

But Nan has another secret, one that has racked her with guilt since her husband's death and made her question ever loving again. As Nan and Dutch plan his escape, can he help restore her faith?

My feelings about Grounded Hearts are mixed, as there were both pros and cons. First of all, I’m always eager to try a new-to-me author, and a story set in Ireland is an added bonus. Jeanne M. Dickson is an excellent writer and it’s rare that I get to read a WWII book that doesn’t involve the Holocaust, so that was enjoyable as well.

The Irish Catholic influence wasn’t unexpected, although I was surprised that it played such a strong part and was portrayed in a negative light – yet it defined who Nan was and gave a rationale to her way of thinking. I loved the small community of Ballyhaven in County Clare and thought the way women supported each other was great. Learning about Ireland’s decision to remain neutral during the war was thought provoking and made an interesting background for Dickson’s storytelling.

A few negatives for me, though. This may be a little thing, but the male characters that I can remember seemed pretty foolish and not very appealing, even the priest, while the women were strong. Secondly, this wartime romance had good potential, but it dominated the story and was way too sensual for my tastes. Nothing explicit, but I halfway expected it at every page turn – with all the physical attraction, noticing of body parts, inward expression of thoughts, and conversations mentioning intimate situations. It’s difficult to explain the difference, but a Christian novel can portray a certain level of intimacy within the marriage context that is realistic and beautiful, while here it felt cheapened. I occasionally read a secular novel and can say that this would be considered a “sweet romance” in that field, but it just didn’t feel right for the Christian fiction audience. And while I understood the initial attraction between Nan and Dutch, their relationship never seemed to deepen beyond the physical.

The other thing was Catholic practices regarding sin and confession, reflected in Mrs. Norman’s words to Nan: “Spending the night in the arms of the man you love is worth the penance.” I imagine this was realistic for the characters in that setting, but just didn’t sit well with me. We do, however, see the God of second chances and that Nan experienced grace and forgiveness in the end. So, while my thoughts were mixed, I would like to see more from this author.

Jeanne M. Dickson was born into an Irish American family, the only girl surrounded by four brothers. She credits her mother, her aunts, and her grandmother with her love of storytelling.

Perfecting her craft, she attends many writer's conferences and over the years, she has won and finaled in numerous RWA romance writing awards including the Daphne du Maurier Award, the Maggie Award, The Molly, The Tara, and she was the overall contest winner of Launching A Star.

Today she lives in Coastal San Diego with her fabulous husband, her two wonderful girls, and a dozen disobedient rose bushes.