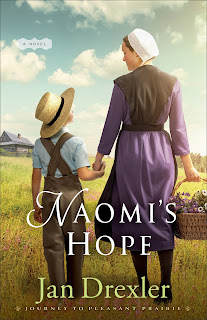 When the future is threatened by the past, can she trust herself to make the right choice?

Despite growing pains in her 1846 Amish community in Indiana, Naomi Schrock has settled into a comfortable life in her parents' home with her adopted son, Davey. Surrounded by family and friends, she tries not to think about the fact that she's not at the top of any man's list of potential wives. Yet when Cap Stoltzfus moves into the area and befriends Davey, Naomi finds herself caught between the plans she has made for her future and the tantalizing thought that Cap might be part of a life she never dared to hope for.

When a couple shows up claiming to be Davey's true family, Naomi and Cap must unite to make the decision that will determine the boy's future--as well as their own.

Naomi’s Hope is a lovely reading experience in every way. This is the first of Jan Drexler’s books that I’ve read, and it’s just my luck for it to be the final book in her series. If you’ve read the previous two books, you’ll enjoy catching up with familiar friends, but enough background is given that this story can stand alone.

I hadn’t read very far before realizing that there was something different about this book. It turns out that Drexler’s ancestors were Amish/Mennonite immigrants, and I believe it’s the inspiration she draws from their stories that makes her writing special. Vivid historical detail is woven into the narrative, conveying not only a sense of place, but pulling you right into the era. It was interesting to notice similarities and differences between 19th-century and contemporary Amish communities. I read a good bit of contemporary Amish fiction – because that’s mainly what’s available – so delving into their history adds a depth that I love.

Naomi and Cap are realistically flawed, but totally appealing characters, maybe because of those flaws and doubts. Naomi accepts that she will never wed and has given her heart to Davey, the young boy she adopted – who is precious, by the way. Cap, still grieving over the deaths of his wife and child, instantly connects with Davey in an endearing relationship that often brings tears to the eyes. 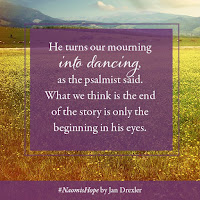 “The Ordnung is a kind of fence.
It tells us where the boundaries are
and helps us make the right decisions”
- Cap to Davey

Naomi’s Hope is filled with spiritual insight, gently woven into the story. I liked that Cap admitted to sometimes being puzzled by the Ordnung, how God’s grace meshed with it. If, like Naomi, you’ve often thought that God was too busy to be involved in the small, routine parts of your daily life, then this story will speak to you. And if you’ve ever questioned why God allows bad things to happen – which probably describes all of us, if we’re honest – then this story will minister to you.

Two secondary characters captured my emotions in completely opposite ways. Shem, who claimed to be an ordained minister, actually brought division by sowing seeds of disharmony, doubt and discord – reminding me of how Satan works. And then there was Christian, a humble man full of godly wisdom.

Sometimes a work of fiction will speak a word of truth that we need to hear, especially me, and Naomi’s Hope did exactly that by reminding how easy it is to allow someone to take God’s place in our hearts.

I greatly enjoyed Naomi’s Hope and look forward to whatever Jan Drexler writes next. 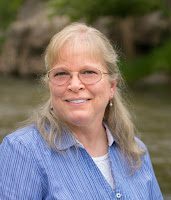 Jan Drexler brings a unique understanding of Amish traditions and beliefs to her writing. Her ancestors were among the first Amish, Mennonite, and Brethren immigrants to Pennsylvania in the 1700s, and their experiences are the inspiration for her stories.

Jan lives in the Black Hills of South Dakota with her husband of thirty-five years. She is the author of The Prodigal Son Returns, A Mother for His Children (winner of the 2013 TARA award), and A Home for His Family (finalist for the 2016 Inspirational Reader's Choice Award), as well as Hannah's Choice and Mattie's Pledge.