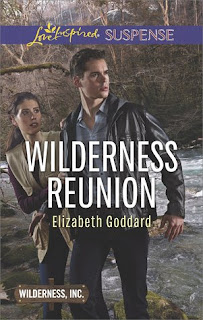 After stumbling on a drug operation, Alice Wilde races through the woods as bullets whiz past, using her skills as a wilderness guide to elude her pursuers. But she doesn't stay safe for long once one of the armed men recognizes her…and starts stalking her.

When the sheriff asks her to guide his men and photojournalist Griffin Slater—her ex-boyfriend—to the crime scene, though, she can't refuse. Alice knows Griffin's just there for a story, but after the two of them are separated from the rest of the group, he's the only person who can save her. And with someone willing to do anything to hunt them down, Alice must put aside their past if she wants to survive.

Wilderness Reunion is an edge-of-your-seat page turner, filled with non-stop action – also impossible to put down. With Elizabeth Goddard’s distinctive gift for conveying vivid imagery and bringing characters to life, I was transported into the Oregon wilderness and caught up in Alice and Griffin’s story from the very first paragraph.

Suspense isn’t my genre of choice, but I’ve consistently enjoyed the Wilderness, Inc. series. For one thing, the stories I’ve read are more action packed than filled with scary suspense or terror. Secondly, in a genre that isn’t known for its character depth, Goddard creates well-rounded characters that readers can immediately connect with.

Wilderness Reunion takes place in Oregon’s wilderness, and I could “see” its wildness, rugged beauty and majesty as I read. In the river rafting scenes, I could almost hear the water churning and roaring around me. Griffin, a photojournalist who captured the tragedies of the world, felt he was damaged goods because of all the horrors he had witnessed. Wonderful romantic tension is created when Alice, who literally finds herself in the wrong place at the wrong time, is forced to rely on Griffin in a life-or-death situation – and both struggle with emotional baggage from their past relationship.

Wilderness Reunion stands out to me because it calls attention to a growing and dangerous problem in our country today –marijuana farms located in remote wilderness areas. Goddard writes at the end: “I wanted to raise awareness of the devastation that’s being inflicted on public lands in our beautiful country. Not only are illegal marijuana farms catastrophic to the land, the wildlife and water, but they’re dangerous to people, especially nature enthusiasts.”

I thoroughly enjoyed Wilderness Reunion and look forward to Elizabeth Goddard’s next series.

I was provided a free copy of this book from the author. The opinions expressed in this review are entirely my own.

Elizabeth Goddard is the bestselling, award-winning author of more than twenty-five romance novels and counting, including the romantic mystery, THE CAMERA NEVER LIES–a 2011 Carol Award winner. She’s a double finalist in the 2016 Daphne Du Maurier Award for Excellence in Mystery/Suspense for her books BURIED and BACKFIRE in the Mountain Cove series.

A 7th generation Texan, Elizabeth graduated from North Texas State University with a Bachelor of Science in Computer Science and worked in high-level software sales for several years before retiring to home school her children and fulfill her dreams of writing full-time. She currently makes her home in Minnesota with her husband and children. 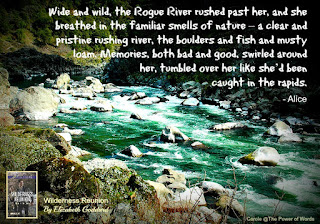