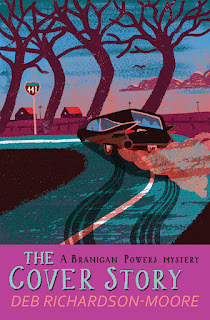 A fatal crash involving two college students heading home for the holidays seems like an unfortunate accident. But when the surviving girl wakens, she tells a curious story of the vehicle that forced them off the road--an old-fashioned, 1950s-style hearse.

Reporter Branigan Powers delves into the mystery that takes her to the college campus and leads her into dangerous fraternity and sorority pledge parties.

Reunited with the homeless Malachi Martin, who is so adept at seeing what isn't there rather than what is, Branigan must uncover what is really going on at the college before other students are put in danger.

This second installment in the author's cozy mystery series delves into the world of newspapers and life on the streets--both of which the author knows well.

In the world of cozy mysteries, Deb Richardson-Moore’s Branigan Powers series is compelling and exceptional. Essential cozy elements are there – amateur investigator, small-town setting – but there’s a depth and complexity that makes it feel like a blend of the cozy and traditional mystery. I would also describe it as fiction with a biblical worldview rather than what we think of as Christian fiction. Although second in series, The Cover Story stands alone.

With each book, I’m immediately pulled into the vividly-conveyed setting, which just happens to be in my home state, and I easily identify with the fictional north Georgia college town of Grambling. Key players in this story are an investigative journalist, police detective, and a homeless man – with a lot of the action focusing on college sororities. The college I attended didn’t have sororities, and after reading The Cover Story, I very glad it didn’t.

Suspects abound as the investigation evolves, often taking off in different directions. I gave up trying to solve the murder and just enjoyed the ride. Branigan, along with her family and friends, are appealing and easy to connect with. There’s even a delightful hint of romance between Branigan and the police detective.

The worst thing about being homeless is
being looked right through.
- Malachi

There’s another side to the idyllic town of Grambling, and that’s the homeless community. The author’s passion for the homeless is contagious, and she helps us see them in a different light. Malachi Ezekiel Martin, a homeless war veteran “with deep wells of knowledge and intuition,” became a standout character when he was introduced in The Cantaloupe Thief, and is developed even more in this story. The mutual caring between Malachi, Branigan, and the family of Pastor Liam, who runs a shelter for the homeless, is a delight. But it is the premise that the homeless aren’t really seen that enables him to successfully investigate. Malachi is an intriguing character and I hope he continues to grow in future books.

The Cover Story is wonderful in every way, as is the series itself - and with an ending that shocked me. May we continue to see much more of Branigan Powers. Best of the best for me.

Please click on the title to see my review of book #1, The Cantaloupe Thief.

I was provided a free copy of this book from Kregel/Lion Hudson. The opinions expressed in this review are entirely my own. 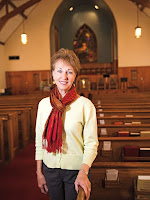 Deb Richardson-Moore is a former journalist, an ordained Baptist minister, and current pastor of the Triune Mercy Center, a non-denominational mission church to the homeless in Greenville, South Carolina. She and her husband, Vince, have three children.