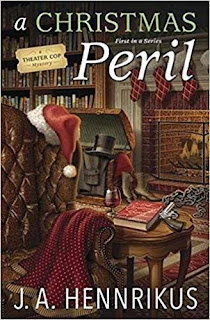 A Christmas Peril
By J. A. Hennrikus
A Theater Cop Mystery #1
Midnight Ink, 2017

When Edwina “Sully” Sullivan’s life imploded, she left behind her job on the police force and her unfaithful husband to start a new life as the general manager of her hometown theater, the Cliffside Theater Company. For five years, she focused on budgets instead of crimes and kept the Cliffside running alongside its mercurial artistic director.

But when her best friend is arrested for killing his father, the rich and powerful Peter Whitehall, no one is looking for another suspect. So, in between keeping A Christmas Carol on budget and Scrooge sober, Sully dusts off her investigative skills to find a killer. Her two lives collide when her ex-husband gets on the suspect list and she’s forced to confront her past in order to save her present.

A Christmas Peril begins an entertaining new series by J. A. Hennrikus. With a former police officer as the lead character, it has a different feel from most cozies that I’ve read. The story is set during the Christmas season and combines elements of both cozy mystery and police procedural.

After leaving the police force, Edwina “Sully” Sullivan became the manager of a local theater company, giving readers a glimpse of behind-the-scene action. Being called on to prove her best friend’s innocence in the murder of his father brings her investigative skills to the forefront. Sully is a strong character, intelligent, and a good friend.

My daughter and I have a tradition of attending the play A Christmas Carol in December, which makes all that goes on with the Cliffside Theater Company’s performance even more interesting. The mystery is well crafted with lots of suspects, but no one being obvious.

While the mystery is neatly tied up at the end, things in Sully’s life aren’t, which sets the stage for future stories in the series. Romance is a subtle theme, with hints of a love triangle to come.

I loved following Sully’s investigation of Peter Whitehall and his family. I do want to point out that there’s a good bit of profanity, which made an otherwise entertaining story not as appealing to me.

Hennrikus blogs with the Wicked Cozy Authors, is on the board of Sisters in Crime, and is a member of Mystery Writers of America. She is also an arts administrator who lives in Massachusetts. Visit her online at www.JHAuthors.com.