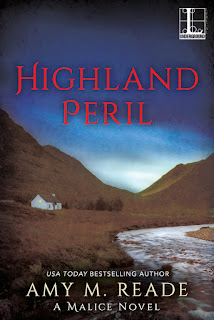 Trading the urban pace of Edinburgh for a tiny village overlooking a breathtaking blue loch was a great move for budding photographer Sylvie Carmichael and her artist husband, Seamus—until a dangerous crime obscures the view . . .

Sylvie’s bucolic life along the heather-covered moors of the Highlands is a world away from the hectic energy of the city. But then a London buyer is killed after purchasing a long-lost Scottish masterpiece from Seamus’s gallery—and the painting vanishes.

As suspicion clouds their new life, and their relationship, Sylvie’s search for answers plunges her into an unsolved mystery dating back to Cromwellian Scotland through World War I and beyond. And as she moves closer to the truth, Sylvie is targeted by a murderer who’s after a treasure within a treasure that could rewrite history . . . and her own future.

I was intrigued by the description of Highland Peril, expecting to discover a cute cozy mystery set in the Scottish Highlands, but this seemed to be more of a traditional mystery or suspense novel. There were some elements that I enjoyed, but this wasn’t a great read for me overall.

I liked the backstory that we’re introduced to in the Prologue, which sets the stage for all that follows. It was interesting to learn of Scotland’s history during the Cromwell years, especially details involving the crown jewels, and the part that man’s greed played. It was so fitting that no one involved in the theft of the jewels led a happy life.

Sylvie and Seamus make a good team with their photography and artist skills, and the marital problems caused by his lack of communication added interest. I enjoyed being pulled into the setting of their studio in the Highlands and even searched for some pictures of the area to gain a deeper appreciation.

The main drawbacks were that the writing didn’t have a professional feel to it and there wasn’t enough character depth for me to know and care about the characters. However, I do think that Highland Peril is a story that fans of Scottish history and suspense might find interesting.

Amy M. Reade is a cook, chauffeur, household CEO, doctor, laundress, maid, psychiatrist, warden, seer, teacher, and pet whisperer. In other words, a wife, mother, and recovering attorney. But she also writes (how could she not write with that last name?) and is the author of The Malice Series (The House on Candlewick Lane, Highland Peril, and Murder in Thistlecross) and three standalone books, Secrets of Hallstead House, The Ghosts of Peppernell Manor, and House of the Hanging Jade.

She lives in southern New Jersey, but loves to travel. Her favorite places to visit are Scotland and Hawaii and when she can’t travel she loves to read books set in far-flung locations.