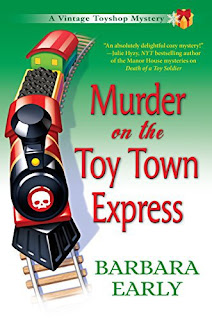 Liz McCall has come to love running her father’s vintage toyshop back home in East Aurora, NY, so when the Train and Toy Show comes to town, she’s all aboard for a fun, toy-filled weekend. The only hitch is that her childhood bully Craig McFadden, now local business rival, has set up a booth next to hers. But the fun and games are over when Craig falls from the ceiling in a publicity stunt gone wrong.

What was initially thought to be a fatal accident proves much more sinister. Pulled into the case by her feelings for both Ken, the police chief, and Jack, her high school sweetheart whose brother is one the prime suspects, Liz dives headfirst into the investigation. But as she digs deeper, she’s shocked to learn her father may have been the intended target.

The trouble train is barreling down and Liz may have just bought herself a first class ticket in Murder on the Toy Town Express, Barbara Early’s delightful second installment in her Vintage Toyshop mysteries.

Murder on the Toy Town Express, #2 in Barbara Early’s Vintage Toyshop series, is a fun, relaxing mystery to curl up with – just that you’d expect in a traditional cozy mystery. What could be more perfect than the small-town setting of a vintage toy store in East Aurora, New York? Well written and populated with likeable characters, my attention was captured from the very beginning.

Much of the beginning action, including the murder, takes place at a Train and Toy Show, but quickly moves back to the quaint toy shop itself, with the creative name Well Played. I loved seeing the toys through the characters’ eyes and they evoked so many childhood memories of mine. I had to smile at Liz’s doll phobia, which I could totally understand, although I adored dolls. And I have to confess that I’ve always had a fascination for toy trains, so it was easy to connect with this story.

The characters felt real and not always perfect, like people I could meet in my daily life. One of the story’s strengths is the caring relationship between Liz and her father, Hank, a retired police officer who has trouble staying retired. Cathy, Liz’s sister-in-law, is a great supporting character.

The murder victim is someone not so likeable, a bullying-type figure from Liz’s past, but questions quickly arise as to who the actual intended victim was. Plenty of suspects, easy to keep up with, and I was never sure I had things figured out. I’ve never cared for love triangles, so I’m not sure what to think of Liz’s two love interests and look forward to seeing how this resolves itself in future stories.

Murder on the Toy Town Express is a clean, enjoyable story, perfect for all traditional cozy mystery fans. Recommended. 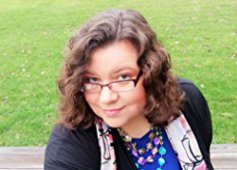 Barbara Early earned an engineering degree, but after four years of doing nothing but math, developed a sudden allergy to the subject and decided to choose another occupation. Before she settled on murdering fictional people, she was a secretary, a school teacher, a pastor’s wife, and an amateur puppeteer.

After several years living elsewhere, she and her husband moved back to her native Western New York State, where she enjoys cooking, crafts, classic movies and campy seventies television, board games, and posting pictures of her four cats on Facebook. She writes the Vintage Toyshop series and the Bridal Bouquet Shop Mysteries (as Beverly Allen).