Review (+ Tour GIVEAWAY): A Room with a Brew 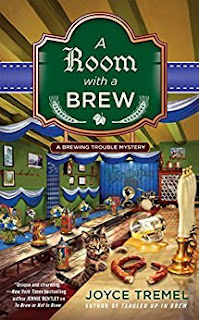 A Room with a Brew
By Joyce Tremel
A Brewing Trouble Mystery #3
Berkley, 2017

It’s Oktoberfest in Pittsburgh, and brewpub owner Maxine “Max” O’Hara is prepping for a busy month at the Allegheny Brew House. To create the perfect atmosphere for the boozy celebration, Max hires an oompah band. But when one of the members from the band turns up dead, it’s up to Max to solve the murder before the festivities are ruined.

Adding to the brewing trouble, Candy, Max’s friend, is acting suspicious… Secrets from her past are fermenting under the surface, and Max must uncover the truth to prove her friend’s innocence. To make matters worse, Jake’s snooty ex-fiancée shows up in town for an art gallery opening, and she’ll be nothing but a barrel of trouble for Max.

A Room with a Brew is a fun cozy mystery set in Maxine O’Hara’s Allegheny Brew House in Pittsburgh. Max, only daughter among several brothers in an Irish Catholic family, is an appealing character and I enjoyed the family dynamics. I wasn’t sure what I would think of a series built around a brewpub theme, but this story is well written and I really liked the ensemble cast. Although third in the series, it easily stands alone.

Bakery owner, Candy, features prominently in this story and much about her background is revealed. And what a fascinating background! I especially enjoyed the wide age range of Max’s friends, who formed a fun little investigating group. On top of everything else is the tension that arises when Jake’s former fiancée comes on scene.

The mystery is well plotted with exactly the right number of suspects and a few twists thrown in just when I thought I had things figured out. With its Oktoberfest theme and oompah band, A Room with a Brew is the perfect seasonal mystery to curl up with during the cool fall months. 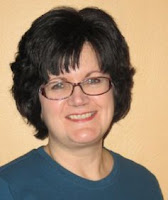 Joyce Tremel was a police secretary for ten years and more than once envisioned the demise of certain co-workers, but settled on writing as a way to keep herself out of jail. She is a native Pittsburgher and lives in a suburb of the city with her husband.