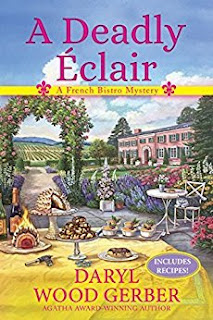 
Note:  This is a repost of my review of A Deadly Éclair, a cozy mystery that I enjoyed very much. The next book, A Soufflé of Suspicion, releases in July.
- Carole

Now it’s up to Mimi to clear her name and get to the bottom of things before the killer turns up the heat again in A Deadly Éclair, the scrumptious series debut by Agatha Award-winning author Daryl Wood Gerber.