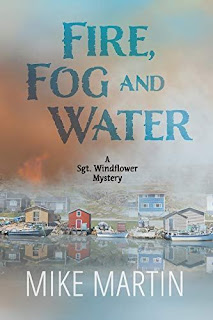 Sergeant Winston Windflower and his trusty crew at the Grand Bank detachment of the Royal Canadian Mounted Police have more than a few mysteries on their hands. Windflower suspects that the three cases—a homicide, a near-homicide and a fire on Coronation Street—are somehow connected, but how is proving difficult to determine, especially now that he must battle his unusually cranky mood, the never-ending winter that has gripped the coastal region of Newfoundland and his new, power-hungry boss.

In Fire, Fog and Water, award-winning author Mike Martin is true to form, retaining the light crime genre for which he is known while delving into the most perplexing social issues of our time, including mental health, addictions and workplace harassment. Windflower must not only solve the drug-and-death crimes that threaten the otherwise tranquil lives of Grand Bank’s residents, he must resolve his own internal conflicts before they consume him as surely as the blaze that engulfed the house on Coronation Street.

The Sgt. Windflower series by Mike Martin is quickly becoming one of my favorites. The setting and lead character are refreshingly different from anything that I’ve read, which engages my interest and pulls me right into the story. There’s a lot of relational and character depth outside of the mystery storyline, which adds richness to the narrative. This eighth book in the series can stand alone, but I recommend reading the entire series for its character development.


The atmospheric Fire, Fog and Water is set in the small community of Grand Banks, Newfoundland. The author’s prose makes the wintertime elements and scenery come alive. Grand Banks is also home to a Royal Canadian Mounted Police detachment, led by Sgt. Winston Windflower. This series doesn’t exactly fit one style, but rather combines elements of traditional mysteries, police procedurals, and cozy mysteries. While the mystery is investigated by the RCMP, the character depth and lack of violence reflect a cozy style.

The Grand Banks setting is one strength of this story, and Sgt. Windflower himself is another. He’s a loving family man, kind and caring, introspective, thoughtful of his coworkers and community, yet he’s portrayed realistically and flawed. I loved the descriptive passages that reflect on his relationship with his wife and daughter. Windflower comes from the Cree community of northern Alberta and is a spiritual man, following the faith of his ancestors. It was fascinating to learn about such practices as smudging and dream weaving. And on the job as crime investigator, he’s intelligent and intuitive.

After commenting on all his good qualities, it’s interesting how, at the beginning of this story, Windflower is cranky and at odds with everyone around him, alienating family, coworkers, even his beloved pets, Lady and Molly. The attitude and actions of Molly, his cat, cracked me up. The mystery involves three seemingly unrelated crimes in which Windflower senses there are dots to connect. The pacing is slow, but steady – building interest, but keeping things easy to follow at the same time.

I’m really enjoying this series and hope for many more Sgt. Windflower mysteries. In the last book I read, A Tangled Web #6, there wasn’t as much character depth as I would have liked, but that’s certainly not the case here. I also appreciate that these stories are clean and contain no profanity.

Highly recommended to all mystery fans.

Mike Martin was born in Newfoundland, Canada. He is the author of the Sgt. Windflower Mystery series. Fire, Fog and Water is the 8th book in the series. A Long Ways from Home was shortlisted for the Bony Blithe Light Mystery Award as the best light mystery of the year and Darkest Before the Dawn won for the 2018 Bony Blithe Award.
Mike is currently Chair of the Board of Crime Writers of Canada, a national organization promoting Canadian crime and mystery writers.