Review: The Roll of the Drums by Jan Drexler 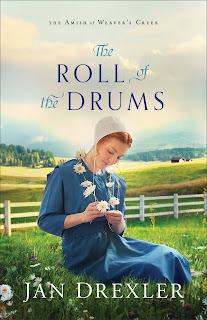 The Roll of the Drums
By Jan Drexler
The Amish of Weaver’s Creek #2
Revell, 2019

How far will she have to go to keep a promise?

Ruby Weaver's curly red hair isn't the only thing that sets her apart from her Amish community in 1863. Twenty-eight and single, Ruby doesn't believe a woman needs to be married in order to be happy. Her ailing friend Lovinia Fischer, however, has other ideas and wants Ruby to promise to marry her husband after she dies. Never imagining she'd have to fulfill that vow, Ruby agrees. And she's not the only one. Lovinia has extracted a similar promise from her husband, Gideon.

With both Ruby and Gideon reluctant to keep their promises, a compromise must be reached. Ruby will spend her days with Gideon's family--helping to raise the children and keep the house--but her nights will be spent at her sister's neighboring house. The arrangement raises eyebrows in their conservative Amish community, and it soon becomes clear that Ruby must make a decision--marry Gideon or turn her back on her friend?

With its depth and realism, The Roll of the Drums by Jan Drexler has a fresh approach to Amish fiction that I greatly enjoyed. This heartwarming story is well written and flows smoothly. My attention and emotional connection never wavered.

Set in rural Ohio of 1863, the series draws us to the Weaver family at a time when the country was torn apart by war. It continues where the previous book left off, The Sound of Distant Thunder, with Katie waiting for Jonas Weaver to return from war, but it can easily stand alone. This story focuses on Ruby Weaver and Gideon, with the Civil War as the backdrop – a war at odds with Amish teaching. I had never given much thought to how Amish men might have served in the military, whether by desire, reluctantly, or by force. How this war affected Amish communities is intriguing and thought provoking.

Gideon is haunted by wartime memories, a war in which he had no choice but to serve for a time. Ruby is a delightful character – a red-headed Amish woman with a joy for life, a belief that marriage wasn’t essential for fulfillment, and an outspokenness that sometimes didn’t serve her well in the Amish community. I loved how the warmth and hospitality of the Amish is reflected as the Weavers take in Gideon’s family. The story of Gideon and Ruby is driven by promises made to Gideon’s dying wife and past events that they struggle with.

I was also drawn to one of the secondary characters – Levi, a minister’s son who is at odds with his father’s goal for his life. I loved his passion for books, theology, and how he felt God’s calling him to ministry in the future. Ruby’s sister who is in a troubled marriage, Elizabeth, appears in this book and I look forward to her story soon.

Recommended to all who enjoy Amish fiction.

Jan Drexler brings a unique understanding of Amish traditions and beliefs to her writing. Her ancestors were among the first Amish, Mennonite, and Brethren immigrants to Pennsylvania in the 1700s, and their experiences are the inspiration for her stories.
Jan lives in the Black Hills of South Dakota with her husband, where she enjoys hiking and spending time with her expanding family. She is the author The Sound of Distant Thunder, Hannah's Choice, Mattie's Pledge (a 2017 Holt Medallion finalist), and Naomi's Hope, as well as several Love Inspired historical novels.