Review + GIVEAWAY: Bonbon with the Wind by Dorothy St. James 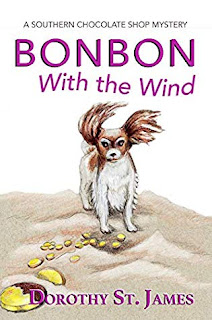 There’s a legend in the Sea Islands that before a hurricane hits the Gray Lady can be seen walking down the beach warning of doom. Penn doesn’t believe in such silly stories, but she does believe weather forecasters. A powerful hurricane is heading their way. Everyone on the island of Camellia Beach is busy boarding up windows and securing valuables to upper levels of buildings. Joe Davies, a local treasure hunter with an unquenchable sweet tooth, claims to have seen the Gray Lady walking toward him just that morning and is terrified for his life.

After the storm passes everyone returns to survey the damage. As Penn walks her little dog Stella on the beach, she finds Joe Davies’ body washed up onshore. Not only that, it looks as if an exploding transformer caused Joe’s seaside shack to burn to the ground. Did the Gray Lady claim another victim? Many on the island believe that is exactly what happened.

Penn is sure there’s another explanation. She follows the clues and hints of lost gold to discover that the truth behind the treasure hunter’s death is as much of a maze as the boating channels winding their way through the local marshes. 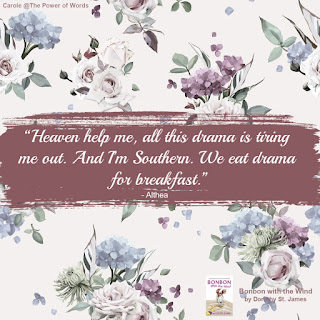 Bonbon with the Wind by Dorothy St. James may look like a typical cute cozy on the cover, but there’s a lot of complexity and depth to this story, making for a very enjoyable reading experience. Tightly-knit plot, rich characters, and an atmospheric setting all combine to make South Carolina’s Lowcountry come alive. I found this story hard to put down and highly recommend it.

Penn is a multifaceted lead character and readers of the series will enjoy seeing the changes that take place in her attitudes and relationships. With a background from a wealthy, but dysfunctional, family, Penn is making a career from the chocolate shop that she inherited from her grandmother. She doesn’t find it easy to let people in and is actually more comfortable focusing on what happened to dead bodies than dealing with the real people in her life. 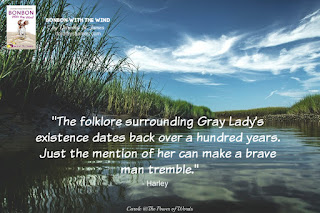 Bonbon with the Wind is set against the backdrop of Camellia Beach, a barrier island off the South Carolina coast, and opens with the onset of a hurricane. This setting is so vividly conveyed and woven so tightly into the story that it literally becomes a major character. Many fascinating elements are featured – island folklore, myths, legends, especially that of the Gray Lady who appears and warns of impending disaster. Penn’s questions gradually uncover more, such as pirate treasure, stolen money and secret identities. And the discovery of Joe Davies’ body quickly results in the arrival of ghost and treasure hunters.

The mystery itself is well crafted and it was only after reaching the conclusion that I could see that possible clues had been scattered throughout. Chocolate fans will love Penn’s shop, especially the new pumpkin seed bonbons that she created. The hurricane – both it’s impending arrival and the aftermath – are realistically and vividly portrayed. The destruction was heartbreaking and it was great to see the Camellia Beach community working together after the disaster.

Bonbon with the Wind is a fascinating, character-driven mystery. It’s also clean, with no profanity or graphic scenes. The Southern Chocolate Shop is one of my favorite series and I look forward to my next visit to Camellia Beach. 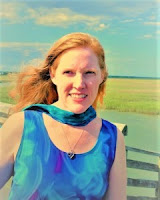 Dorothy St. James is the author of the White House Gardener mysteries.
For the past twenty years she made her home on Folly Beach, an artsy island community in South Carolina with her sculptor husband. Dorothy is a member of Mystery Writers of America (MWA), Sisters in Crime (SiNC), and the International Thriller Writers (ITW).
This is her fourth Southern Chocolate Shop mystery.