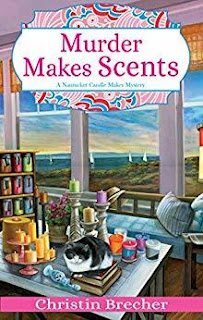 Stella Wright loves creating candles at her Nantucket store—and she also has a burning passion for justice. Now, after visiting a perfume conference, she must solve a vial crime . . .

Stella and her globe-trotting mom, Millie, have come home from a perfume industry conference in Paris, where their trip was marred by witnessing the stabbing death of a young man. It’s a relief for Stella to be back on her picturesque island, with the comforting company of her cat, Tinker. But lingering danger may have followed them back across the ocean.

After someone breaks into her candle store, the Wick & Flame, Stella starts feeling spooked. And just as things threaten to ignite, Millie suffers a blow to the head. Stella receives an anonymous note claiming that her mother smuggled a secret formula out of France—and threatening her life if it isn’t returned. Now Stella’s picked up the scent of a cold-hearted criminal and an intriguing puzzle, and things are about to get wicked . . .

The combination of a Nantucket setting and the craft of candle making initially drew me to this series by Christin Brecher and I enjoyed book two, Murder Makes Scents. Brecher’s knowledge and love for the island convey the vividness of setting with such places as Brant Point, jetties beach, the village’s cobblestone streets, and the historical Jared Coffin House. Stella, owner of the Wick & Flame store, is easy to connect with.

The story opens with Stella and her mother, Millie, attending the World Perfumery Conference in Paris, where Millie is making a presentation. Stella and her mother share a love for scents – Millie traveling around the world in search of unique and exotic scents, and Stella perfecting fragrances into her making of candles. It’s great to see them together in this story and I enjoyed not only their relationship, but the knowledge I gained about the development of scents for candles and their extraction from the Amazon jungles.

Murder Makes Scents is somewhat different from other stories in this genre because it contains elements of international espionage. The murder that takes place in the opening pages at the Paris conference, related to an upcoming international Peace Jubilee, follows Stella and Millie back to Nantucket. While the plot is intriguing, I did think it was a little over the top and far fetched for a cozy mystery. That being said, however, the writing is very good and I greatly enjoyed setting and characters. We are presented with five or six characters who are new to the island, any one of which could be the murderer, and the author does a great job at creating varying levels of suspicion for each.

Stella’s cat, Tinker, is precious as he radiates the endearing behavior of cats, as well as a few actions that are entirely his. I can’t wait to see if he is eventually successful in cultivating the friendship with Millie. A secondary theme is Stella’s romance with Peter, which I’m not quite sure about, because I didn’t sense much chemistry between them and I actually like her strong friendship with the police officer, Andy.

Murder Makes Scents is an enjoyable cozy mystery with very little profanity, and I look forward to more stories in the Nantucket Candle Making series.

Christin Brecher was born and raised in NYC, where her family and many childhood friends still reside. As such, she feels she is as much of a small-town girl as any.
The idea to write the Nantucket Candle Maker series sprang from her life-long connection to the small island off the coast of Massachusetts. Spending summers there as a child, Christin read from her family’s library of mystery novels, after which she began to imagine stories inspired by the island’s whaling heyday, its notoriously foggy nights, and during long bike rides to the beach.
After many years in marketing for the publishing industry, followed by years raising her children, Murder’s No Votive Confidence is Christin’s debut novel. 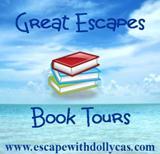