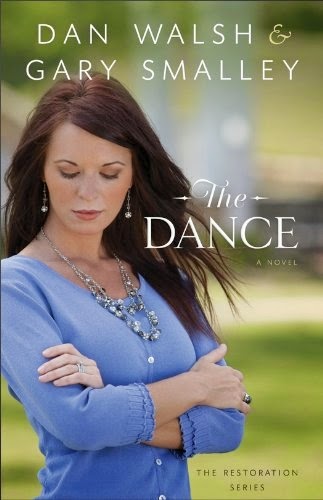 The Dance
By Dan Walsh and Gary Smalley
The Restoration Series, #1
Revell, 2013

Jim Anderson is a successful businessman, and his wife, Marilyn, is the perfect wife. And why wouldn’t she be? He gives her everything she needs. That’s why Jim never expected to come home one day and find Marilyn gone.

After 27 years of marriage, Marilyn has had enough of feeling unloved and neglected. She wants to experience some measure of happiness before she’s too old to enjoy it, even signing up for dance lessons, something Jim would never do. What will it take for Jim to finally become the man Marilyn needs him to be?

From now on, whenever I hear the phrase "the power of story," The Dance by Dan Walsh and Gary Smalley is one book that will quickly come to mind. The narrative takes real-life issues that many of us face - lack of communication, the drive to get ahead, acceptance by peers, financial insecurity - and meets them head on in a story with relationship advice seamlessly blended into a storyline that simply entertains. The Dance, book one in The Restoration Series, is a character-driven novel, written in an easy-to-read style that captured and held my attention from the very first page.

On his blog, Dan says this about The Restoration Series:  "We’ve written the series hoping to reach thousands of Christians who may be struggling or coming up short of their expectations for a truly happy home." While the focus is on the marriage of Jim and Marilyn Anderson, I think the relational gems in this book would help strengthen any relationship. The novels are mostly set in the fictitious town of River Oaks, Florida, which is inspired by a real-life, storybook-like town of Celebration near Disneyworld. Be sure to visit Dan's Restoration Series Pinterest board to get a glimpse of this charming town.

The Dance is a book that beautifully weaves Dan Walsh's literary talent with Gary Smalley's relationship expertise, and entertaining fiction with educational truths. I would have thought this blending of styles and message would be somewhat difficult to achieve, but they made it look effortless. Jim and Marilyn are sympathetic characters that I could easily relate to, and strong supporting characters added richness to the story. I especially enjoyed dance instructor Audrey and Jim's Uncle Henry, the hippie who'd found Jesus after almost dying of a drug overdose at Woodstock.

Everything had to revolve around Jim, who had spent years crafting his reputation, and Marilyn avoided confrontation. But while Jim initially attributed their separation to Marilyn's selfishness, it quickly became an eye-opening experience. And I thought the church they attended almost became a major character, for I have known of churches like that - status driven, prestigious, legalistic. In Jim's thoughts, he "was a pariah now, inside that building. A man fallen from grace. If not from God, certainly from men. . . . One never rises once fallen from grace. Not in this church."

The Dance is a story of hope, prayer, forgiveness, restoration, and new beginnings. The beauty of Christianity is God restoring us relationally to Him, and we see another kind of restoration in this story - the marriage relationship - that reflects Christ's relationship with us. The Dance is an example of the power of fiction to transform lives and I highly recommend it.

The Dance can be purchased online at CBD, DeeperShopping, B&N, and Amazon. The third book in this series, The Desire, releases on August 26, 2014.

Dan Walsh is the bestselling author of several books, including The Unfinished Gift, The Discovery, and The Reunion, as well as The Dance and The Promise with Gary Smalley. He has won three Carol awards, and three of his novels were finalists for RT Book ReviewsInspirational Book of the Year (2011-2013). Dan lives with his wife in the Daytona Beach area, where he's busy researching and writing his next novel. 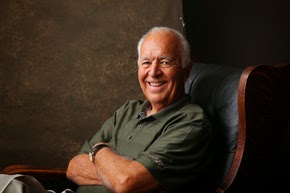 Gary Smalley is one of the country's best known authors and speakers on family relationships. He is the bestselling and award-winning author or coauthor of 16 books, along with several popular films and videos. He has spent over 30 years learning, teaching, and counseling, speaking to over 2 million people in live conferences. Smalley has appeared on national television programs such as Oprah, Larry King Live, Extra,The Today Show, and The Sally Jessy Raphael Show, as well as numerous national radio programs. Gary and his wife, Norma, have been married for 50 years and live in Branson, Missouri. They have three children and six grandchildren.

Thank you to Revell for providing a copy of this book through NetGalley in exchange for my honest review.
Posted by Carole at 9:39:00 PM