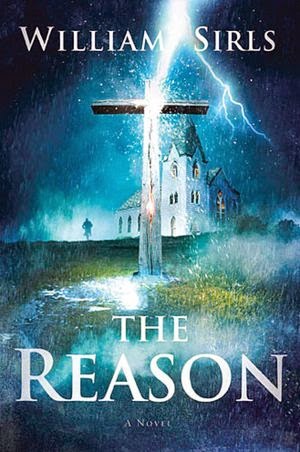 Storm clouds gather over a small Michigan town. As thunder shakes the sky, the lights inside St. Thomas Church flicker . . . and then go out. All is black until a thick bolt of lightning slices the sky, striking the church’s large wooden cross—leaving it ablaze and splintered in two.

When the storm ends—the search for answers begins.

James Lindy, the church’s blind minister, wonders how his small congregation can repair the cross and keep their faith in the midst of adversity. And he hears the words “only believe.”

Macey Lewis, the town’s brilliant young oncologist, is drawn to Alex, a young boy who’s recently been diagnosed with an aggressive leukemia. She puts her hope in modern medicine—yet is challenged to “only believe.”

And Alex’s single mom, who has given everything she can to her boy, is pleading with God to know the reason this is happening . . . to save her son. But she only hears silence and wonders how she can possibly “only believe.”

The Reason is a milestone debut novel, opening with a thunderbolt and never letting up as it introduces us to everyday characters who are wrestling with the questions: Where is God when bad things happen? And does God ignore the prayers of the faithful? The answer each character receives will astound readers while offering an unforgettable call to hope, to change, to . . . only believe.

The Reason is a 5-star book that entertained and strengthened my faith.

First, let me say that this is not the type of novel that I usually read, but I was drawn by the words of William Sirls on a review blogger's site, contacted him, and was blessed to receive copies of both of his novels. The Reason is a moving story that contains life lessons involving faith, grace, patience, and forgiveness. And the reading has even greater impact when you realize that this story came out of William's personal and painful experience.

William's debut novel is well written, has a spiritual theme with great personal application, and is supported by a fascinating ensemble cast. I'm not sure how to describe the literary style, but it felt like a contemporary drama combined with elements of medical fiction, fantasy/speculative, parable, and allegory. What I liked so well is that it seemed like I was reading a gospel account in a contemporary setting - where Jesus had personal encounters that changed lives and He performed miracles to prove His divinity.

The main characters have a crisis or something in their past such that, when they come into contact with the Christ figure, Kenneth, they are forced to examine their faith, or lack thereof. This gripping story centers around Brooke and little Alex, who suffers from an aggressive form of leukemia, but other characters are impacted in various ways - such as Zach, who felt that science had somehow put God out of a job . . . Kaitlyn, who went to church for weddings, funerals, and Christmas Eve . . . and Macey, who relied on medicine and personal ability to perform miracles in the lives of her patients.

The Reason's message is powerful, yet simple, and encourages personal reflection. Do I sometimes have difficulty believing what I know to be true, that "God has a plan, and everything does happen for a reason" (Pastor Jim)?  Am I quick to rely on my own abilities?  I found Kenneth's words to Macey haunting:  "What if your best isn't good enough?"

Whether to trust or not is a decision that I seemingly have to make over and over, and I can't help but think of how Jesus always marveled when He saw great faith. I'm reminded of the father in Mark 9 who cried out, "I believe; help thou mine unbelief" (KJV).

The Reason is a compelling read that I recommend to everyone, believer and seeker alike.

The Reason can be purchased online at CBD, DeeperShopping, B&N, and Amazon.

Born on April 3, 1964 in Detroit, Michigan, to a construction worker and a homemaker, William Sirls grew up as the youngest of six children. Active in both sports and imagination, he aspired primarily to become either a professional golfer or attorney. Realizing he didn’t have the talent or the grades for those careers, he shifted gears and went in another direction.
Over the course of his life, he has experienced both great highs and tremendous lows— some born of chance, some born of choice. Years before the publication of his first novel, he worked 60 hour weeks as a senior vice president at one of the nation’s largest investment firms, somehow finding time to read three to four books per week and to rough out ideas for different stories of his own.
In early 2004, while visiting his oldest daughter at a Detroit hospital, he came across a young cancer patient that was being pulled in a little red wagon by his parents. At the time, Sirls had no idea that he was looking at three characters that would appear more than eight years later in The Reason.
He was incarcerated in 2007 for wire fraud and money laundering. While in prison, Sirls learned a great deal more than he ever bargained for.
He is the father of two and makes his home in southern Michigan.

Thank you to William Sirls for providing a copy of this book in exchange for my honest review.
Posted by Carole at 2:58:00 PM