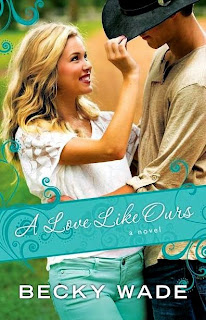 A Love Like Ours
By Becky Wade
The Porter Family, #3
Bethany House, 2015

Former Marine Jake Porter has far deeper scars than the one that marks his face. He struggles with symptoms of PTSD, lives a solitary life, and avoids relationships.

When Lyndie James, Jake’s childhood best friend, lands back in Holley, Texas, Jake cautiously hires her to exercise his Thoroughbreds. Lyndie is tender-hearted, fiercely determined, and afraid of nothing, just like she was as a child. Jake pairs her with Silver Leaf, a horse full of promise but lacking in results, hoping she can solve the mystery of the stallion’s reluctance to run.

Though Jake and Lyndie have grown into very different adults, the bond that existed during their childhood still ties them together. Against Jake’s will, Lyndie’s sparkling, optimistic personality begins to tear down the walls he’s built around his heart. A glimmer of the hope he’d thought he’d lost returns, but fears and regrets still plague him. Will Jake ever be able to love Lyndie like she deserves, or is his heart too shattered to mend?

Becky Wade has an enjoyable writing style that is lyrical, romantic, heartwarming, with delightful elements of humor thrown in at just the right moment. I don't think I'll ever come across one of Becky's books that doesn't touch me in some way, but I found A Love Like Ours especially moving, even to the point of tears at times - and that's rare for me. The cover beautifully captures the essence of Jake and Lyndie's personalities, but there are hidden depths to this story, both spiritual and emotional. While their love story is the backbone of the novel, many other elements are cleverly woven throughout - PTSD, survivor's guilt, physical disabilities, trusting God when life makes no sense, the dignity and value of all life. A Love Like Ours is, in essence, a story about rediscovering hope that once was lost - and that's something that will speak to just about every reader.

This is Becky's first series, and while it must be somewhat difficult to keep up with and advance characters' stories, I have totally embraced the Porter family and Lyndie's as well in this story. Becky says on her website that she writes "about imperfect, flawed people who are nonetheless loved by a perfect God" - and that's what makes her stories easily connect with readers.

"Twelve-year-old Jake Porter never felt a hundred percent right
unless Lyndie James was beside him."

A beautiful, rare relationship, that of soulmates, simply stated in these opening words. And one that eventually comes full circle, capturing this reader's heart and emotions in the process.

Rich characterization is one of this book's strengths, evidenced not only by Jake and Lyndie, but several secondary characters as well. Jake - affectionately described as "Tall, Dark, and Brooding" by Lyndie - is a Thoroughbred horse trainer, eight years removed from military service in Iraq, but carrying the invisible scars of PTSD. His social behavior reflects just that - hidden walls to protect from feeling, disconnected from people, a disbelief in the goodness of God. Going into this book, I knew a good bit about PTSD on paper, but being privy to Jake's torturous thoughts and nightmares made it real. I was immediately drawn to Jake, understanding the reasons for his brusqueness, and he became one of my favorite characters of all time.

Lyndie is just as strongly drawn - compassionate, captivating, imaginative, determined and plain out adorable. She has a natural way with animals and I loved the way she was able to unlock the mystery of why the Thoroughbred, Silver Leaf, wouldn't run. But what drew me to Lyndie most was that, rather than allowing Jake to intimidate her, she desired to help and was determined that the powers of his dark world would not overtake him.

But the character who touched me most couldn't even see, and that was Mollie, Lyndie's 27-year-old sister who had cerebral palsy. While Becky is quick to point out that it is always God who heals, we know that God works in mysterious ways, and it was moving to think that He might have used this precious lady at times - especially with her ability to draw Jake out and make him feel.

Also woven throughout are spiritual messages that I needed to hear - that loving someone is about acceptance of their weakness and flaws in addition to all that's good, and that we need to trust God with the things we can't control.

I don't know what Becky has planned next, but I certainly hope there will be a fourth book, because I have enjoyed reconnecting with the Porter family and am not ready to let them go - but then, will I ever?! However, I'm intrigued by the younger sister, Dru, and felt the stage was being set for her story. And there are some questions I'd love to see answered . . . For instance, will Bo and Meg ever be able to have a child? Does Silver Leaf go on to be a true champion? Do Amber and Will find happiness together?

I thoroughly enjoyed A Love Like Ours and hated to reach the final page. Highly recommended.

I also wanted to mention something very special that Becky is doing to honor our military, through a wonderful organization that provides therapy for both physical and mental health conditions. Becky writes on her website . . .

"I’m so pleased on announce that Jake Porter, the hero of A Love Like Ours, will be doing his part to raise awareness and support for our real-life heroes: the members of our military! I’ll be giving a percentage of my earnings on every copy of A Love Like Ours sold between now and May 17th to the Intrepid Fallen Heroes Fund. I encourage you to pre-order the novel or pick up your copy in stores or online prior to May 17th!" 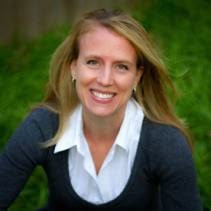 Becky Wade is a native of California who attended Baylor University, met and married a Texan, and moved to Dallas. She published historical romances for the general market, took time off to raise her children, then felt God nudging her to pursue contemporary Christian fiction. Becky’s work has been a finalist for both a RITA and an INSPY Award.