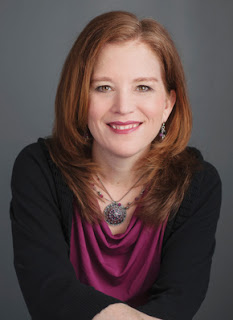 Surely most fans of historical romance have already discovered the wonderful writing of Jody Hedlund . . . and if not, I can almost guarantee that it will only take the reading of one book to become hooked.

I hope you will enjoy this visit with Jody today, as she shares about her newest release from the Beacons of Hope series, Hearts Made Whole (click on title to see my review). Romance, historical detail, character depth, adventure, lighthouses - this book has it all and I highly recommend it.

Also, one of you will win a copy of Hearts Made Whole, so enjoy Jody's interview and enter to win at the end.


Q:  You talked on your website about how your mom facilitated your love for reading at an early age, Jody. What were one or two books that you treasured most?

Anne of Green Gables and A Little Princess


Q:  How did you come up with the idea for Hearts Made Whole?

Historical textbooks are full of stories about men like George Washington, Thomas Edison, Andrew Carnegie, and so many more.  And while such men are truly remarkable, all too often their stories overshadow equally courageous and remarkable women. One of my goals as an author is to help bring forgotten women of the past to life.
In the Beacons of Hope series, I'm focusing on historical women light keepers who have often been kept in the dark by the more prominent stories of their male counterparts.
As I researched for writing a lighthouse series, I came across a fantastic book called, Ladies of the Lights: Michigan Women in the U.S. Lighthouse Service. The book is a tribute to the approximately 50 or so women who served either as primary or assistant keepers in Michigan Lighthouses.
I based the heroine in Hearts Made Whole on one of those women light keepers. It's my hope to bring her and the other women keepers out of the historical shadows and into the spotlight. 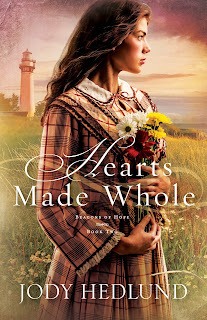 Q:  What is the story about and who are the main characters?

This story is set at a lighthouse in southern Michigan on Lake St. Clair where the heroine, Caroline Taylor, is the acting light keeper. However, in the time directly following the Civil War, women weren't allowed to be light keepers if a man was available instead. Men were almost always given precedence.
Along comes the wounded war hero, Ryan Chambers, who having a little bit of lighthouse experience is looking for a place where he can be isolated and nurse his physical and emotional wounds.
Of course, when the two meet, they're both competing for the same job. Caroline needs to stay in the position in order to provide for her four younger siblings. And Ryan needs the job so that he can save to repay his war debts.
As is always true for my books, when the hero and heroine meet both danger and romance abound!


Q:  Each of your lighthouse books is set at a real lighthouse that once existed in Michigan or still does exist. Tell us a little about the lighthouse in this second book.

In my first lighthouse book (Love Unexpected), the lighthouse was set at Presque Isle which is on Lake Huron on the north eastern side of the state. For the second book, I picked a lighthouse in a completely new location with the intention of giving readers a different flavor of climate, geography, and the population.
Windmill Point Lighthouse once existed on Lake St. Clair near Detroit, a much more urban and highly trafficked area than the remote wilderness of Presque Isle. Windmill Point Lighthouse was a strategic beacon that helped ships cross from Lake Huron over into Lake Erie as those ships transported raw goods from the Northwest states to eastern cities and seaports.
The lighthouse is named after the old ruins of a windmill where early frontiersmen brought their grain for grinding. Also, legends attribute the area to being an old battle field of a savage encounter between the early French settlers and Indians. As many as 1000 Fox Indians were slaughtered on the banks of Lake St. Clair. Later settlers to the area uncovered bones, arrowheads, tomahawks, and other gruesome mementos of the battle.
Today, all traces of the original windmill, lighthouse, and burial grounds are long gone. If you visit Grosse Pointe in the Detroit area, all that remains is a small conical structure with a white flashing light.


Q:  Many of the heroines in your books are inspired by real women. Is that true of the heroine in Hearts Made Whole? If so, what women provided inspiration?

The woman light keeper in Hearts Made Whole is inspired by Caroline Antaya. Caroline lived at the Mamajuda Lighthouse on the Detroit River a short distance away from Windmill Point Lighthouse.
Caroline's husband served with honor in the Union army during the Civil War, losing several fingers on his hand at Gettysburg. Eventually after returning from the war, her husband was named as keeper of the Mamajuda Lighthouse, but he passed away of tuberculosis.
Part of what really impressed me about Caroline Antaya's situation was that she had been doing a fantastic job as a light keeper. But the district lighthouse inspector trumped up charges against her saying that she was in ill-health and incompetent. He took away her position simply because she was a woman and gave it to a man instead. Fortunately, her community rose to her defense and enlisted the help of a Michigan Senator to help her get her position back and she went on to serve as a light keeper for another three years.
In those days, when women were regularly discriminated against because of gender, Caroline's story is inspirational and an encouragement to persevere in the face of injustice. I admired Caroline's will to stand up for herself and to pave the way for women coming after her to use their God-given talents and abilities in roles and jobs that had previously been closed to women.


Q:  What do you hope readers take away from Hearts Made Whole?

Readers familiar with my books will know that I'm not afraid to tackle really tough issues. That's especially true in Hearts Made Whole. Since the hero is coming home as a Civil War veteran, he's facing some post-traumatic stress as well as debilitating war wounds that leave him addicted to his pain medicine.
At the same time the heroine is struggling to act as both father and mother to her four siblings while holding down a job as light keeper. She has the overwhelming job of trying to take care of everyone and everything while always remaining strong.
Both characters come to a point where they recognize they can't face all of their overwhelming troubles on their own and cry out to God their desperate need for Him. I hope that readers will take away a desire to turn to God in their most desperate needs too and know that He is there waiting to comfort and help them. 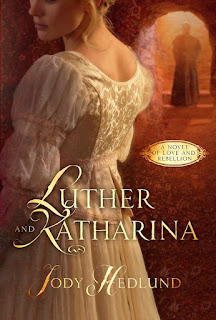 Q:  What stories can your readers look forward to in the days ahead?

In October, look for my historical called Luther & Katharina with Random House (Waterbrook) It's a book based one of the greatest untold love stories: the courtship and marriage of the great reformer, Martin Luther to a runaway nun Katharina von Bora. He's a heretic wanted dead or alive, and she's a noblewoman without a family or home. Amidst the dangers of pope, princes, and revolting peasants, the two must wage war to find a love of their own.


Q:  How can we support and/or pray for you, Jody?

My oldest son just graduated from high school and so I'd love prayer for him and for my husband and I as we prepare to send him away to college in August.

To enter the drawing for Hearts Made Whole . . .

1) If you're on Facebook, please visit my book review page at ThePowerofWordsBookReviews and "like" it if you would care to (not required).

2) Answer the following question or leave a comment for Jody:

Are you new to Jody's books? If you're already a fan,
do you have a favorite that you would like to recommend?

BE SURE to leave your e-mail address in a safe format - [at] and [dot] - for the drawing. And if you'd like to receive e-mail notifications of reviews, author interviews and giveaways, please subscribe to my blog in the upper right corner.

Contest ends at midnight PST on Monday, June 22. Winner will be chosen by Random.org and contacted by e-mail.