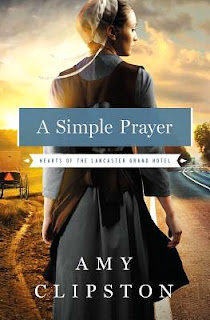 A Simple Prayer
By Amy Clipston
Hearts of the Lancaster Grand Hotel, #4
Zondervan, 2015

Linda is no stranger to hardship. Now she dares to hope for a chance at love and a new beginning.

As the sole survivor of a buggy accident that left her orphaned at age four, Linda Zook was reluctantly raised by her Uncle Reuben. She longs to be worthy of someone, but the lasting trauma of her injuries and embittered upbringing have destroyed her self-worth. When Hannah Peterson asks her to work at the Heart of Paradise Bed & Breakfast, she’s finally able to realize some confidence.

Aaron Ebersol left the Amish community seventeen years ago when he could no longer bear the restrictions or the constant tension with his father. Despite years of unanswered letters to his parents and the roots he’s put down in Missouri, Aaron rushes back to the Amish community of Paradise, Pennsylvania, after receiving word of his mother’s stroke. Hesitant to get too close to the family he was once a part of, he decides to stay at the Heart of Paradise Bed & Breakfast. Talking with Linda allows him to explore his feelings about his family and his position in the Amish community.

As Linda and Aaron open up to each other, their feelings for one another turn into more than friendship, and Aaron must make a decision about his future as an Amish man.

Can Linda and Aaron forgive the family members who have deceived and forsaken them? And will Aaron be able to convince Linda that she is worthy of his love?

A Simple Prayer is a sweet Amish story, one that I greatly enjoyed - as is the case with all of Amy Clipston's stories that I've read so far. Amy has the ability to convey a sense of place and pull me right into the story, making me easily connect with the characters. The setting is in Paradise, Pennsylvania, and several scenes take place at the Heart of Paradise Bed & Breakfast run by Hannah and Trey from book #1. "Simple" may be in the title, but there's a complexity to these characters and all that they have to work through. Each book in this series can stand alone, but it was good to see characters from previous stories. Series readers will also enjoy seeing a conclusion to storylines involving both Hannah/Trey and Madeleine/Saul.

Aaron and Linda are such endearing, down-to-earth characters! Both were raised Amish and had a similar longing for a real family, which is something to which most of us can relate. Their relationship started in a way that is so easy to build upon - with simple friendship through conversations where they shared feelings and events from their past. Often it takes another person to open our eyes to things we've been unable to see, and I loved how Linda and Aaron were able to offer godly wisdom to each other. The unyielding resentment of Aaron's brother, Solomon, and Aaron's desire to return home, coupled with fear, were very real.

This story mirrors certain aspects of the Prodigal Son parable, contrasting both the anger and unforgiveness of Aaron's older brother with the unconditional, undeserved welcome and acceptance of his parents. I actually gained a deeper appreciation for how the biblical older brother might have felt, for while Solomon's bitterness seems to be related to concern for his mother's health and happiness, the root of his anger goes much deeper. He first reflects that his parents "seemed so happy to see Aaron, as if they had been broken the whole time he'd been away," and then later confesses, "I was the one who had to give up my dreams to take care of the mess Aaron left behind."


Themes of home and family, forgiveness and compassion are the framework for this story, as evidenced in the bishop's words to Aaron:  "You didn't have to leave. There's nothing so bad that it can't be solved with some prayer and your family's support." A Simple Prayer reflects the very real struggles that the Amish face, which are no different from ours, but with the effect of faith, prayer, love and forgiveness in their daily lives.

A Simple Prayer was an enjoyable, compelling read for me and I highly recommend it to all fans of Amish fiction.

Amy Clipston is the award-winning and best-selling author of the Kauffman Amish Bakery series. Her novels have hit multiple best-seller lists including CBD, CBA, and ECPA. Amy holds a degree in communication from Virginia Wesleyan College and works full-time for the City of Charlotte, NC. Amy lives in North Carolina with her husband, two sons, and four spoiled rotten cats.

Thank you to Amy Clipston for providing a copy of this book in exchange for my honest review. 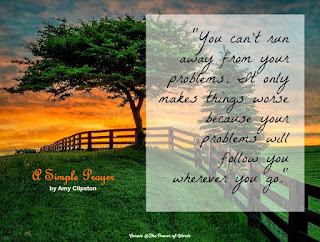