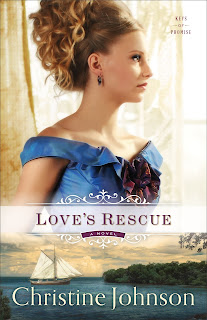 When her mother dies, Elizabeth Benjamin heads home to Key West, determined to transform herself into the perfect Southern belle her parents always wished her to be. But nothing goes according to plan. Her crippled brother resents her, the servants do not obey her, and Rourke O'Malley, the dashing man she vowed to forget, refuses to relinquish his hold on her heart. Worst of all, it becomes painfully obvious that her father is not the upright man he appears to be.

As family secrets come to light, Elizabeth is faced with a difficult choice: to do her duty and abandon her dreams, or to leave her life of privilege behind to chase the man her father sees as little better than a pirate.

From the first emotional page, author Christine Johnson throws readers into a world of impossible choices, hidden desires, and heart-melting romance in the steamy south. Readers will cheer for Elizabeth and Rourke as they battle the odds and the elements to secure their future.

Christine Johnson has published stories in the Love Inspired line before, but I believe Love's Rescue is her first full-length novel and I have to say that she has given us a very interesting story. There's a lot to like here - adventure on the seas, strong family dynamics, star-crossed lovers, and the vivid setting of Key West in 1850. I also loved the way themes of secrets, guilt, and unfaithfulness are contrasted with grace and forgiveness.

One of the things I enjoy most is when an author creates characters and a setting to which I want to return, and that's exactly what Christine has done. Who can't imagine the sunshine and clear waters of Key West, or the fury of a tropical storm or hurricane? I found the 1850 time period fascinating with the city rebuilding after a hurricane, the importance of social status, and shipwrecks on the reefs.

It took a little time for Elizabeth to grow on me because she seemed awfully strong willed, selfish and thoughtless, especially in the beginning, but that changes. Rourke makes a great leading man - honorable, caring, and with a strong faith - qualities not usually found among wreckers in the Key West area, a field often populated with the unscrupulous. In a time when slaves weren't recognized as having rights, I found the confidence, trust and friendship that he extended to his chief mate, John, very moving. Elizabeth's father and Aunt Virginia give new meaning to the term "manipulative" and any romance between Rourke and Elizabeth seems doomed. While I wished for more "together" time for these two so I could see their relationship develop, their romance is still tender and sweet.

"Love does right even when it hurts." With this overarching theme, the difficulty of extending grace when we've been wronged is shown, and the beauty of grace, given and received, shines brightly in Love's Rescue. I don't know if Christine will revisit these characters in the next book, but I was particularly drawn to a few of the secondary characters, such as John & Anabelle, and Elizabeth's crippled brother, Charlie. Really wished for more character depth with these three.

Christine did a great job with Key West as a historical setting, an area she is obviously passionate about, and Love's Rescue is a story that fans of historical fiction should enjoy. You will also enjoy visiting Christine's Pinterest board for Love's Rescue.

Christine Johnson is the author of several books for Steeple Hill and Love Inspired and has been twice named a finalist for Romance Writers of America's Golden Heart® award. When not writing, she loves to hike and explore God's majestic creation. These days, she and her husband, a Great Lakes ship pilot, split their time between northern Michigan and the Florida Keys.