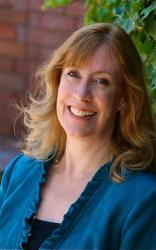 An interview with Sarah Sundin,
Author of Through Waters Deep


Thank you so much to Litfuse Publicity and Sarah Sundin for providing this interview and giveaway opportunity for one of this blog's readers!

Although I'm not easily a fan of WWII novels, I have to admit there's something special about Sarah's stories and I wouldn't dare miss a single one. Covering the tense months right before the U.S. entered the war, Through Waters Deep - with its characterization, storyline, and historical detail - is a treasure for historical fiction fans. Sarah's research is always impeccable, but more than that, she has the ability to bring you right into the sights and emotions of that era. Please click on the title, Through Waters Deep, to see my review.


Q: Through Waters Deep is the first book in your new Waves of Freedom series. What’s it like for you to start a new series?

Both exciting and scary. I love getting to know a whole new cast of characters, but it takes time to get to know them. I love the challenge of a new setting, but the research can be daunting. I loved stretching myself by writing a mystery plotline for the first time, but sometimes I felt I’d gotten in over my head. And I never know what my readers will think of the new series . . . kind of like trying a completely new haircut and waiting for your friends’ reactions!


Q: You are known for finding inspiration for elements of your story plots in Scripture. Which verse did you choose for Through Waters Deep?

Ironically, the verse I originally chose didn’t really play into the book after all. However, verses emerged when I wrote the story. For Mary Stirling, who struggles with a fear of attention, her theme verse is Matthew 5:15-16: “Neither do men light a candle, and put it under a bushel, but on a candlestick; and it giveth light unto all that are in the house. Let your light so shine before men, that they may see your good works, and glorify your Father which is in heaven.” Mary learns that using your gifts isn’t prideful when you do it to call attention to God, not to yourself. 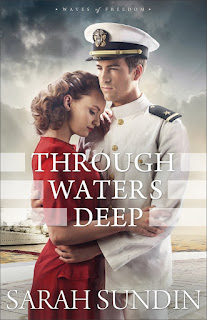 Q: Why do you like setting stories during the World War II period?

It’s a fascinating era filled with drama, action and romance. Ordinary men learned they could do extraordinary things, and women tried new roles while still remaining ladies. When we read of how people in the 1940s prevailed in times of uncertainty and fear and danger, it gives us hope we can prevail today, no matter what we face.


Q: Do you know anyone who served in the Navy during World War II? Did you draw from real stories as you wrote Through Waters Deep?

My grandfather served as a pharmacist’s mate (medic) in the U.S. Navy in World War II. He was quite the storyteller! His wartime stories were medical in nature, and I adapted one of them in my Wings of the Nightingale series. For the Waves of Freedom, I read several accounts by U.S. naval officers who served on destroyers.


Q: What fact did you find most interesting as you did research for this book?

I found something new and interesting almost every day! The novel itself was inspired by the little-known fact that six American ships, including a destroyer, were sunk by German U-boats in 1941 — before Pearl Harbor! Even those sinkings and the deaths of more than 100 sailors and merchant marines didn’t provoke the United States to enter the war.


Q: The U.S. was united immediately after the attack on Pearl Harbor in 1941, but earlier that year a different cultural temperature existed. How does this time remind you of today’s world?

While we all look back nostalgically at the unity in America during World War II, the States were anything but united in 1941. Interventionists were alarmed by the situation in Europe and wanted to join the war effort before Britain fell. Meanwhile, the isolationists felt the best way to save America was by staying out of yet another European war. They argued bitterly, with lots of name-calling. The stark division and the angry debate remind me too much of the nation in 2015. I pray it won’t take another Pearl Harbor to bring us back together again.


Q: This book contains an element of mystery; is it hard to create that kind of suspense?

What challenged me most was the complexity of a mystery plot. About a dozen suspects and investigators, acting, reacting to each other, implicating others, telling the truth, telling lies, planting clues. My head swam. So I made a chart. That’s what I do when I get confused. I had a column for each character and described what they were doing or thinking in each scene and between scenes. It helped me so much.


Q: What message do you hope readers take away from reading Through Waters Deep?

Hoist your sails! Jim Avery is an easygoing, “float with the current” man who learns the hard way that floating can carry him onto the rocks. And Mary Stirling keeps her sails bound tight in false humility, fearful of becoming prideful, fearful of falling. Jim and Mary learn, “We have to hoist our sails. We have to let the Lord fill them. Then we have to resist the current if necessary to stay the course. . . . Then we can fly with the wind.”
However, I’ve learned readers often take away a completely different message than what’s written, and that’s wonderful! I’m in awe of how God can take a simple story and use one element to touch a reader’s heart in a personal and unique way. So I hope readers take away what the Lord wants them to take away.


Q: What can readers anticipate as you continue the Waves of Freedom series?

To enter the drawing for Through Waters Deep . . .

1) Please go to my Facebook page and share about this giveaway ("likes" to my FB page are not required, but very much appreciated).

2) If you're a fan of Sarah's writing, do you have a favorite book or series? Or any WWII book? Simply leave a comment to enter.

BE SURE to leave your name and your email address in a safe format - [at] and [dot] - for the drawing. E-mail required for entry. Contest ends at midnight PST on Monday, September 14. Winner will be chosen by Random.org and contacted by e-mail.