Review: Until My Name Is Known 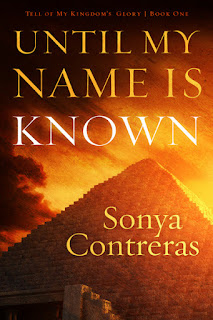 Until My Name Is Known
By Sonya Contreras
Tell of My Kingdon's Glory, #1
Bull Head Press, 2015

The Exodus of the Jews from Egypt is a love story between God and His people. God woos His people to Himself as He prepares them to leave. Before leaving, God must fight Pharaoh for possession of His people. See how God changes all people: some for the better, others not. None stay the same. How will He change you? Can you trust a God Who destroyed a nation before your eyes? Would you want Him as your Friend?

See God free His people from Egypt's bonds before a watching world. Trace His Finger in the lives He touches. The time: 2450 BC. The Place: Old Kingdom of Egypt where Pharaoh is god. His people worship him. Israel's God arrives. He challenges Pharaoh. His power touches all people. They must change. Some do not concede. They suffer. Others yield. They find freedom.

Until My Name Is Known brings all to see the one true God. Read it to see Him. Today's historians and archaeologists puzzle over the fall of the Old Kingdom of Egypt, But the world at that time heard of God. The world knew that He is the Lord. His Name was proclaimed in all the earth.

Until My Name Is Known is a work of biblical fiction, spanning the time from the call of Moses at the burning bush to when the Israelites stand on the other side of the Red Sea. Sonya is passionate about retelling the Exodus story in a fresh way, through a variety of Egyptian and Hebrew characters, and showing God's faithfulness throughout. While it didn't quite pull me in as a work of fiction, there were parts that I did enjoy.

Sonya gives much attention to historical detail and the archeological influence adds a fresh touch. It was interesting to think what it might have been like to be the wife or mother of a firstborn son. Zipporah gives voice to man's questioning of God as she struggles with a God who would require such a mission from her husband.  And then there's the age-old problem of pain and suffering, reflected in Aaron's question, "Will anyone seek God, if he doesn't know he needs God?"

One reminder of God's faithfulness is something that I haven't often thought about, and that's the carrying of Joseph's bones out of Egypt. "God heard the desire of a man and granted it four hundred and twenty years later. "

Several themes are woven through the framework of this book - that there is but one true God and He is more powerful than any god of man, the need to totally trust God - but the overarching theme is God's constant faithfulness. I need and welcome constant reminders of these aspects of God's nature.

The series continues with book #2, I Have Called You by Name. I believe that fans of biblical fiction rich in historical and archaeological detail would enjoy this book. 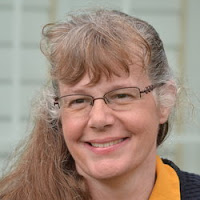 Growing up with five sisters, Sonya Contreras asked God many questions, even when she did not like His answers. Graduating from Cedarville University and Institute for Creation Research with a Masters Degree in Science Education did not stop her questions. Marrying her best friend and homeschooling their eight sons, she found that dreams do come true, in spite of unanswered questions.