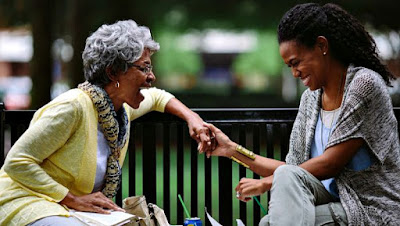 I was blessed to see War Room this week and it still fills my thoughts. Storyline, acting, and filming all came together in a beautiful way. And when it comes to impact, I hardly know what to say, because it's that powerful. Its target is the Christian audience, with the purpose of helping us go deeper in the strengthening of our faith and relationship with God through the power of surrendered prayer. It would be a shame if the crowds of people flocking to theaters simply enjoy War Room as an entertaining movie and fail to let it change their lives.

Another effect is that the Kendrick brothers are now on my radar screen, for I had no idea they were co-writers and producers of other movies like Facing the Giants, Fireproof, and Courageous. And I hadn't even heard of their first shoestring-budget movie, Flywheel, which is apparently a fan favorite.

If you've seen this movie, what are your thoughts?

The people at Sonoma Christian Home are doing a wonderful job promoting War Room and everyone involved. Here are some excerpts from their interviews with Alex and Stephen Kendrick, Karen Abercrombie (Miss Clara), and T.C. Stallings (Tony).

Q: What led you to make a movie on prayer?

Stephen: We spent a year asking the Lord what the next movie should be about. He focused us on prayer. He gave Alex a storyline idea about a couple struggling in their marriage and how prayer was going to impact that. At the same time He was teaching us and calling us to deeper levels of prayer in our personal walk with Him. In looking back, it’s the natural progression for us as we see where the culture is going, the needs of the church, and what we’ve experienced in our own lives.

Q: Karen, what do you see God doing with faith-based movies, television, or other media in the future and in our culture?

Karen: The quality is becoming better and better. Prayer is critical. As we fall to our knees to align with Him, God is bending down to us, giving us newer and newer opportunities because of His grace. Christian, faith-based movies are meeting people where they are, and giving us a glimpse of Himself as a multi-faceted diamond.

Q: T. C. Stallings plays the successful business man in this movie who is standing in the need of prayer. Why did you choose him for this particular role?

Alex: We had worked with TC in Courageous and saw his growing faith. We admired that he was more serious about his walk with God than his film career.  When it came time to do War Room, he was our first choice because he desires to live the principles that you see presented in this movie. He is faithful to his wife, and he wants to honor God with every role he accepts. He is the kind of actor we want to give a platform to.


Q: T. C., your performance in War Room was so moving. What an authentic portrayal of a broken, human man desiring change and healing! How were you able to go there emotionally?

T. C.: I had that broken moment in my real life. After living several years as a believer, I learned how to be a Christ-follower. I thought I had been respecting God. But when I was shown that I wasn’t, I was broken.
I remember sitting on my bed in my college dorm room as a sophomore at the University of Louisville, just crying my eyes out. I looked at how I was hurting God and how I was hurting Christianity, making it hard for others to see who Jesus is because of my hypocrisy.

Q: Priscilla Shirer plays his wife in her debut role as an actress. What led you to cast her in this role?

Alex: The Lord led us to her. Priscilla also believes the message in this movie and will speak to it. I had chills when we shot a scene near the end of the movie where Miss Clara challenges Elisabeth to invest her life in other women, and teach them how to pray and fight their battles on their knees. Priscilla was the perfect person for this because she does this in her ministry every day, and she loves our Lord. She lives the message in this movie and will use it in her platform.

Q: Priscilla’s daughter was also phenomenal. How did you find her?

Stephen: She is actually related to Priscilla, and she suggested that we allow her to try out for the part. At the try-outs, she clearly beat out all the other girls who had professional acting experience. Alena is the daughter of Jonathan and Wynter Pitts. Jonathan works with Tony Evan’s ministry and Wynter is Priscilla’s cousin.

Q: With each movie, God continues to open up new doors. What doors has He opened for you through this film?

Stephen: He has given us favor with leaders of ministries, and political and cultural leaders. He has given us the opportunity to encourage and challenge them.  He has also opened doors with colleges and universities who are beginning film schools. We are asking Him to help us be good stewards of the resources and platforms that He has led us to. There are many wonderful ministries that have invested in and poured into our lives and our marriages.


I really can't say enough good things about this movie and I hope you'll be able to see it if you haven't already. If you can, take someone with you - for War Room might just be exactly what they need at this point in their lives.

Visit the Sonoma Christian Home website to see these full interviews and much more.