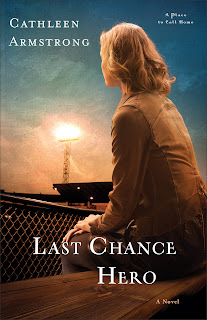 What happens when your heart is intercepted before you even know it's in play?

The folks in Last Chance, New Mexico, could not be more pleased. Dr. Jessica MacLeod has opened an office right on Main Street and Andy Ryan, the best athlete the little town ever produced, has come home from the NFL to coach the high school football team. Unfortunately, Dr. Jess immediately gets off on the wrong foot with this football-obsessed town when she admits that she's never seen a football game, isn't really interested in doing so, and in fact doesn't know a first down from a goalpost.

Despite having little in common, Jess and Andy find themselves drawn to each other. But when a disagreement over the future of an injured player puts them both on the defensive, it begins to look like this game is over . . .

I don’t believe Cathleen could have come up with a more appropriate series title than A Place to Call Home, for there’s so much to like in the rural southwestern New Mexico town named Last Chance. Cathleen has certainly written about what she knows, for her knowledge and passion for this desert area is vividly captured through her writing. And when it comes to characterization, Cathleen has created a lively and endearing ensemble cast – from Elizabeth Cooley, a seasoned woman of faith who cements these stories together, to the quirky Juanita, waitress at the Dip ‘n’  Dine. I have greatly enjoyed this heartwarming series with its genuine characters, each book seemingly more than the previous one, but that might be because I’ve grown attached to these characters and am eager to return. This series is different from a lot of what’s out there, and I appreciate that.

Last Chance, New Mexico . . . where a high school football hero returns to coach his hometown team and a young medical doctor decides to set up a family practice. Within this framework, Cathleen delivers surprising depth through relational elements, humor, and social issues – alcoholism, abandonment, and abuse – and Last Chance Hero certainly struck a chord with me.


It took a while for me to warm up to Jess, but the deeper Cathleen delved into her character, the more I felt for her as she struggled to find her place in this rural community and rejoiced as she formed friendships with previous characters. Jess “had never encountered a place like Last Chance, where everybody seemed to have known everybody else all their lives. They were friendly and even welcoming, but she still had that feeling that she was company and they were family.”

Andy is an empathetic character to which I was immediately drawn – easily hurt, hides his feelings, pressured on all sides to bring the team back to its winning “Glory Days,” and trying to reconstruct his violent growing up years by reconstructing the house he grew up in. There’s a sweet chemistry between these two opposites that I really enjoyed.

Faith is a key part of this story and I loved the relationship between Jess and Elizabeth, especially the impact of Elizabeth’s faith and testimony - for Elizabeth had the peace that we all long for when prayers aren't answered in the way we desire.

Last Chance Hero is a beautifully moving story, and while it can stand alone, I recommend reading the books in order for character development and sense of place – and I hope there’s more to come. Highly recommended.

Cathleen Armstrong lives in the San Francisco Bay Area with her husband, Ed, and their corgi. Though she has been in California for many years now, her roots remain deep in New Mexico where she grew up and where much of her family still lives. After she and Ed raised three children, she returned to college and earned a BA in English. Her debut novel Welcome to Last Chance won the 2009 American Christian Fiction Writers Genesis Award for Women's Fiction.