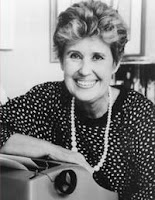 Knitters
Every woman fights the doldrums in her own way . . .

Learning how to knit was a snap.  It was learning how to stop that nearly destroyed me.  Everyone in the house agreed I was tense and needed to unwind.  So, I enrolled in an informal class in knitting. The first week I turned out thirty-six pot holders.

I couldn't stop myself.  By the end of the first month of knitting, I was sick from relaxation.  There were deep, dark circles under my eyes.  There were calluses on both my thumbs and forefingers.  I cried a lot from exhaustion.  But I was driven by some mad, inner desire to knit fifteen toilet tissue covers shaped like little men's hats by the end of the week.

In the mornings I could hardly wait until the children were out of the house so I could haul out my knitting bag full of yarn and begin clicking away.  "All right, group, let's snap it up," I'd yell.  "Last one out of the house gets underwear for Christmas."
"It's only six-thirty," they'd yawn sleepily.
"So you're a little early," I snapped impatiently.
"BUT IT'S SATURDAY!" they chorused.

My husband was the first one to suggest I needed professional help.  "You've gone beyond the social aspect of knitting," he said.  "Let's face it.  You have a problem and you're going to have to taper off.  From here on in no more yarn."  I promised, but I knew I wouldn't keep my word.

My addiction eventually led to dishonesty, lying, cheating, and selling various and sundry items to support my habit.  I was always being discovered.  The family unearthed a skein of mohair in a cereal box and an argyle kit hidden in the chandelier, and one afternoon I was found feverishly unraveling an old ski cap just to knit it over again.  One night when the clicking of the needles in the darkness awakened my husband, he bolted up in bed, snapped on the light, and said quietly, "Tomorrow, I'm enrolling you in 'Knitters Anonymous.'  Can't you see what's happening to you?  To us?  To the children?  You can't do this by yourself."

He was right, of course.  "Knitters Anonymous" pointed out the foolishness of my compulsion to knit all the time.  They eventually weaned me off yarn and interested me in another hobby - painting.

Would you believe it?  I did eight watercolors the first week, fifteen charcoal sketches the second, and by the end of the month, I will have racked up twenty-three oils . . . all on stretched canvasses!
- Erma Bombeck, At Wit's End, Nelson Doubleday, Inc., 1965
Posted by Carole at 6:10:00 PM