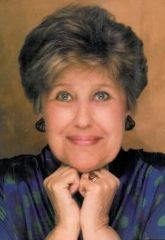 
I can't remember exactly when I discovered the writings of Erma Bombeck - but since my mother was an avid reader and a fan of Erma's weekly newspaper column, I'm sure I have her to thank. Oh, how we loved to share a laugh!

Erma Bombeck was an American humorist who achieved great popularity for her newspaper column that described suburban home life from the mid-1960s until the late 1990s. Erma also published 15 books in her life, many of them best sellers.

From 1965 to 1996, Erma wrote over 4,000 newspaper columns chronicling the ordinary life of a Midwestern suburban housewife with broad, and sometimes eloquent humor. Erma had one of the longest running columns in newspaper history. At the same time, she battled breast cancer and a deadly kidney disorder.

At the age of 20, Bombeck was diagnosed with polycistic kidney disease, a hereditary disorder which causes cysts to form on the kidneys. Told that she would one day suffer kidney failure, Erma went on with her life, destined not to be controlled by her disease. Longing to be a journalist, Erma enrolled in the University of Dayton, where she was told by professors that she would never succeed in writing. Hoping to prove them wrong, in 1949, Erma took her first job in the field of journalism, as a reporter for the Ohio Journal Herald. That same year, she married Bill Bombeck, a school administrator she had met and courted in college.

Erma Bombeck passed away on April 22, 1996 from complications of a kidney transplant.

Since this blog is all about the impact of words, I'd like to share highlights of Erma's writing from time to time. Maybe some of you will also be encouraged to seek out her books. To whet your appetite, here are a few of her often-quoted lines:

"If a man watches three football games in a row, he should be declared legally dead."

"The only reason I would take up jogging is so I could hear heavy breathing again."

"In general, my children refused to eat anything that hadn't danced on TV."

"Never loan your car to anyone to whom you've given birth."

"A child needs your love more when he deserves it least."

I told you I was sick." (She requested this to be her epitaph.)

"When I stand before God at the end of my life, I would hope that I would not have a single bit of talent left, and could say, 'I used everything you gave me.'"