Review: A Passion Most Pure 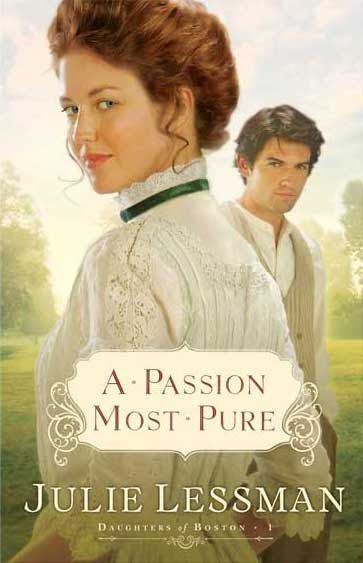 A Passion Most Pure, book 1 of the The Daughters of Boston series by Julie Lessman, begins the saga of Patrick and Marcy O'Connor and their children.  The novel carries the reader from "the sophisticated streets of Boston to the green hills of Ireland as men go off to war and women long for their return."  Passion, romance, rivalry, and betrayal - these elements capture the reader's attention from the very beginning.


Description:
She's found the love of her life. Unfortunately, he loves her sister. As World War I rages across the Atlantic in 1916, a smaller war is brewing in Boston. Faith O'Connor finds herself drawn to an Irish rogue who is anything but right for her. Collin McGuire is brash, cocky, and from the wrong side of the tracks, not to mention forbidden by her father. And then there's the small matter that he is secretly courting her younger sister, Charity. But when Collin's affections shift, it threatens to tear her proper Boston family apart.


I had mixed feelings about this book, but the bottom line is that it kept my attention and I enjoyed it enough to continue on with the series.


There is much to like about this book.  I fell in love with the O'Connors.  Maybe being an only child drew me to this large, close-knit family; I certainly look forward to each child's story in future books.


Julie has a flowing, descriptive writing style that is easy to follow.  Faith's love for Collin is a major theme, and after their first kiss in a park, we read:  "He turned and was gone, leaving her as cold and still as the statues scattered throughout the park. . . . For years he'd possessed her dreams, but she'd been the master of those dreams.  Now he possessed her memory, and there was nothing she could do about it."  Later that same day, Julie describes a scene in Brannigan's Pub:  "A haze of smoke, sweetened by the stale scent of perfume and whiskey, hung in the air like a fog, creating the illusion that those in its midst were happy."


The faith element is much stronger than in most Christian fiction today.  Every character has flaws, and Julie doesn't gloss over that part - but redemption is a major theme, at least for some characters.  Much biblical wisdom comes through Faith's neighbor and spiritual mentor, Mrs. Gerson, a sweet and loveable lady.  I also like that Julie portrays the strong faith of a devout Catholic family, also unusual in Christian fiction, but fitting for an Irish-American family.


As for the "passion" element that Julie is famous for, it was refreshing to see passion depicted between the couples.  These passages are sensual in their expression of passionate kisses and are more descriptive than most Christian romances, but they are realistic and I never felt she crossed the line.  In fact, the tender, romantic moments between Patrick and Marcy are favorite parts for me.  To see an older married couple, still deeply in love with each other and enjoying that love, is wonderful.


Julie knows how to tell a story well, but a few things bothered me.
-- Faith's younger sister, Charity, was determined to steal Faith's boyfriends.  The Faith-Collin-   Charity triangle (and later Mitch) was a major theme throughout, but it quickly got old.
-- Could Patrick and Marcy not see what Charity was doing?  And I could never understand the underlying reasons for Charity's actions.
-- Are all men, no matter how mature and strong their faith, susceptible to the schemes of a beautiful young girl coming on to them?
-- Faith's quick loss of faith and bitter words when betrayed by her sister seemed out of character, and her return to faith a little too pat.  I also wanted to see her apologize to Charity.
-- I don't care for a big age difference in couples, and I believe there were fourteen years between Faith and Mitch.  And for Charity and Mitch, it would be sixteen years.
-- Boston and Ireland are two of my favorite settings, but I never got a real sense of either place.  Physical descriptions of these areas would have been a great addition.

If anyone has read this book or others by Julie Lessman, I'd love to know your thoughts.
Posted by Carole at 1:42:00 AM