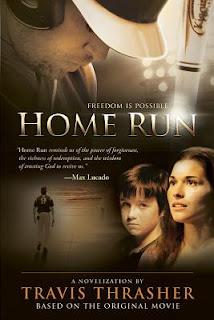 By Travis Thrasher
Home Run by Travis Thrasher is the novelization of a major motion picture by the same name, coming to theaters on April 19, 2013.  This movie, starring Vivica A. Fox and Scott Elrod, is an inspirational story of the hope and freedom God offers each of us.


Baseball star Cory Brand knows how to win. But off the field, he’s spiraling out of control. Haunted by old wounds and regrets, his future seems as hopeless as his past. Until one moment—one mistake—changes everything.


To save his career, Cory must go back to the town where it all began. His plan is simple: coach the local Little League team, complete a recovery program, and get out as fast as possible. Instead, he runs headfirst into memories he can’t escape ... and the love he left behind. Faced with a second chance he never expected, Cory embarks on a journey of faith, transformation and redemption. And along the way, he discovers a powerful truth: No one is beyond the healing of God.


Travis Thrasher did an excellent job of writing this companion book to the soon-to-be-released movie, Home Run, and I enjoyed it very much.  This book is more of a relationship drama rather than a sports-themed novel.


The character of Cory Brand is realistically drawn with depth.  Flawed - and not even likeable for most of the book - he nonetheless becomes sympathetic as Travis reveals the background that drives his self-destructive actions.  Cory is naturally gifted with a baseball bat, but the opening pages reveal an ongoing abusive childhood scene that was partly responsible for his incredible skill.  "Even after leaving this place, Cory felt like he had the weight of his father on him, watching him, swearing at him, scolding him.  There was nothing he could have done to be acceptable in his father's eyes, even when the old man got older and more feeble and tried to get right with all of them."


Cory's younger brother, Clay, never gave up on Cory, even when hurt and rejected - and always in Cory's shadow when it came to athletic ability.  One particular scene stood out to me, where Clay was trying to stop Cory from driving too fast:  "Clay shouted something, but Cory didn't hear the words.  He was just thinking about when the levee might break and the past would come gushing out over him like a Gatorade bucket full of hurt and disappointment. "


In an effort to rebuild his professional image, Cory is required to attend eight weeks in Celebrate Recovery.  I wasn't familiar with this program and found it very interesting.  Celebrate Recovery is for any type of addiction.  It was started 20 years ago in the Saddleback Church where Rick Warren preaches, and has grown into a successful nation-wide program.  Cory's mentor, J. T., was a particularly likeable character and built a good relationship with Cory.  " Cory watched J. T. and knew the faith this man had was real.  He didn't wear it like a logo on a hat or a shirt.  He wore it like a belt buckle, hidden away but necessary 'cause it held him up."


Spiritual themes of confession, forgiveness, and relinquishing control to God play a big part in this story.  "Cory knew he no longer needed to bat off all the hurtful objects coming his way.  He wasn't batting to protect himself and his little brother.  He wasn't batting for his life.  I'm here to do the thing God gifted me to do."


The ending was upbeat, yet realistic.  I would recommend Home Run to all who enjoy Christian fiction that is character driven and relationship based.


This book was provided by David C. Cook through NetGalley in exchange for my honest review.
Posted by Carole at 3:25:00 PM