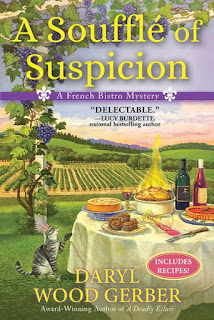 The buoyant mood at Bistro Rousseau deflates when Chef Camille’s sister, Renee, turns up dead in the chef’s kitchen, and Mimi Rousseau must tease the real killer out of a mélange of menacing characters.

Crush Week in Nouvelle Vie is a madhouse—in a good way. Tourists pour into town for the pressing of the Napa Valley’s world-renowned grapes and all the town’s businesses get a nice lift, including Bistro and Maison Rousseau. Mimi is raising the ante this year with a Sweet Treats Festival, a wonderland of croissants, cakes, tarts, and soufflés crafted with expert care by the area’s top talents.

Chef Camille’s sister Renee is managing the festival with a cast-iron fist, upsetting everyone, including her sister. Which is bad for Camille when Renee turns up dead in the chef’s kitchen. Mimi is still building her business, so her first course of action is to whip up answers and catch the unsavory perpetrator before Camille takes a dusting and gets burned.

A Soufflé of Suspicion, book #2 in the French bistro series, is delicious – and I don’t mean that as a pun. It is simply the essence of all that a cozy mystery should be. Mimi is a great lead character and I enjoyed getting to know her even better in this second novel. The Napa Valley setting is vividly conveyed, filling my senses with its sights and activities. Food lovers will find this series fascinating and maybe even want to try a few recipes that are included.

Someone should give Mimi an award for being one of the world’s best multi-taskers! With the death of Chef C’s sister, Mimi steps in to help in the kitchen – and that seemingly overwhelming task is in addition to running a bistro and inn, dealing with local festivals and Crush Week, and investigating a murder. But Mimi is surrounded by a great supportive cast of family and friends, making the story even richer.

I enjoyed the mystery element as well, never quite confident that I had it all figured out. With all that Mimi is involved in, it’s natural for her to talk to people; she’s good with people and a good listener. As the layers are gradually peeled back, we learn more about the chef’s sister, including some questionable things. I liked how the investigation progresses logically and the final solution wasn’t all that obvious to me. I also appreciate that Daryl writes clean stories.

I’m not a foodie, but I really enjoy the French Bistro series because the food theme just provides a background to characters I like to spend time with. Recommended to all cozy mystery fans. 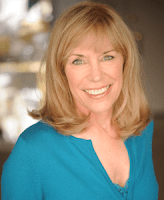