Review + GIVEAWAY: Midnight on the River Grey by Abigail Wilson 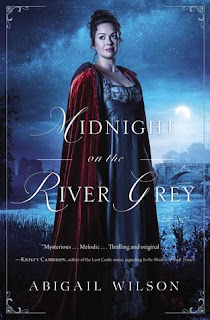 Abigail Wilson returns to Regency England with another tale of murder, mystery, and romance.

After her elder brother’s mysterious death, Rebecca Hunter vows to expose the man she believes responsible-Mr. Lewis Browning-known by the locals as the Midnight Devil and by Rebecca as her new guardian. He alone was on the bridge that fateful night and openly admits striking her brother with his horse, but he claims he remembers little else.

Summoned to his reclusive country estate to await her London season, Rebecca plans her own secret investigation. Yet, Lewis Browning is not as she once imagined, and his motivation is horribly unclear. Recurrent nightmares and Rebecca’s restless feelings are further complicated by the shadow of her mother’s prior descent into madness and whether she too will follow the same heartbreaking path.

Even as midnight rides, strange injuries, and further murders lead back to Lewis, Rebecca can’t ignore the subtle turn of her heart. Has she developed feelings for the man she swore to see hanged? And moreover, can she trust him with her uncertain future?

Abigail Wilson is a fresh voice in the historical romance genre and I enjoyed every minute reading Midnight on the River Grey. With a style reflective of the gothic romances of Victoria Holt and the Regency romances of Georgette Heyer, the author has captured the atmospheric feel of the era. Just picture Rebecca’s first sighting of Greybourne Hall, the country estate of Lewis Browning …

Years of history and neglect had left a steady hush throughout Greybourne Hall. Almost as if the soul of the house had left it long ago and what remained was a hollow shell.

Rebecca is a strong and spunky heroine who reluctantly agrees to move to Greybourne Hall. Believing that Lewis is responsible for her brother’s death, she also realizes that this move presents her with the opportunity to learn more about the events leading up to his death. But in a story where nothing is quite as it seems, Rebecca struggles with the difference between the Lewis she believes him to be and the Lewis she encounters daily. There’s great chemistry between these two and I loved the way their relationship builds. Lewis has become one of my favorite fictional heroes.

The author also knows how to deliver on the unexpected. Twists and turns abound. Rebecca is determined not to marry because of her mother’s mental illness, but is there something she doesn’t know about its cause? And is the brother she lovingly remembers from childhood all that she thought he was? I loved how things are slowly revealed in this fast-paced page turner as Lewis and Rebecca grow closer. Two secondary characters also add much richness – Rebecca’s Aunt Jo and an English springer spaniel named Sophie.

I greatly enjoyed Midnight on the River Grey and look forward to more stories from the pen of Abigail Wilson.

Abigail Wilson combines her passion for Regency England with intrigue and adventure to pen historical mysteries with a heart. A Registered Nurse, chai tea addict, and mother of two crazy kids, Abigail fills her spare time hiking the National Parks, attending her daughter’s gymnastic meets, and curling up with a great book.
In 2017, Abigail won WisRWA’s Fab Five contest and in 2016, ACFW’s First Impressions contest as well as placing as a 2017 finalist in the Daphne du Maurier Award for Excellence in Mystery/Suspense.
She is a cum laude graduate of the University of Texas at Austin and currently lives in Dripping Springs, Texas, with her husband and children.
Connect with Abigail at www.acwilsonbooks.com; Instagram: acwilsonbooks; Facebook: ACWilsonbooks; Twitter: @acwilsonbooks.


An excerpt from Midnight on the River Grey

My heartbeat turned sluggish as an ache swelled in the back of my throat. This man—the person responsible for my brother’s death—expected me to live with him? In his house? Madness.

“I’m afraid there is little choice in the matter at this point. The arrangements are already complete.”

Mr. Browning narrowed his blue eyes, scrutinizing me, no doubt, as the numbing shock of his declaration faded to resignation across my face. He sighed. “I do realize Greybourne Hall might hold unfortunate associations for you—”

“Unfortunate?” My voice came out a bit louder than I’d expected. “Is that what you choose to call it?”

He gave a sideways glance at Aunt Jo then returned to me, a pained look hovering about his eyes. His voice, however, remained firm. “Forgive me if I startled you. I hadn’t expected such a violent reaction to what I assumed was the logical next step. Perhaps I should make myself a bit clearer.” He gave a curt sigh. “I only intend for you to stay at Greybourne Hall till some place more suitable can be arranged. Unfortunately, there are few options at present.”

Ice enveloped my heart. I had no wish to travel to, let alone live at that dreadful house, not even for a single night. In his letters, Jacob had described the rambling structure as a gray pile of stones fit for vampires, or worse. I could only image Mr. Browning, this dark-headed devil before me, at home in such a place.

To celebrate her tour, Abigail is giving away a grand prize of a copy of her book!!

Be sure to comment on the blog stops for nine extra entries into the giveaway! Click the link below to enter.