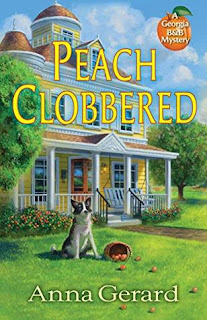 What’s black and white and dead all over? Georgia bed and breakfast proprietor Nina Fleet finds out when she comes across a corpse in a penguin costume.

Nina Fleet’s life ought to be as sweet as a Georgia peach. Awarded a tidy sum in her divorce, Nina retired at 41 to a historic Queen Anne house in quaint Cymbeline, GA. But Nina’s barely settled into her new B&B-to-be when a penguin shows up on her porch. Or, at least, a man wearing a penguin suit.

Harry Westcott is making ends meet as an ice cream shop’s mascot and has a letter from his great-aunt, pledging to leave him the house. Too bad that’s not what her will says. Meanwhile, the Sisters of Perpetual Poverty have lost their lease. Real estate developer Gregory Bainbridge intends to turn the convent into a golfing community, so Cymbeline’s mayor persuades Nina to take in the elderly nuns. And then Nina finds the “penguin” again, this time lying in an alley with a kitchen knife in his chest.

A peek under the beak tells Nina it’s not Harry inside the costume, but Bainbridge. What was he doing in Harry’s penguin suit? Was the developer really the intended victim, or did the culprit mean to kill Harry? Whoever is out to stop Harry from contesting the sale of his great-aunt’s house may also be after Nina, so she teams up with him to cage the killer before someone clips her wings in Peach Clobbered, Anna Gerard’s charming first Georgia B&B mystery.

One of its strengths is the strong sense of place, the fictional town of Cymbeline, Georgia, located about an hour from Savannah. The author has her finger on the pulse of the small southern town and vividly conveys the charming feel. Into this town comes lead character, Nina, who fell in love with a Queen Anne house while visiting and quickly made the decision to purchase. Having lived in Atlanta and recently divorced from a well-known professional golfer, Cymbeline offers the quieter pace and fresh start that she needed.

Nina is an engaging character, spunky and caring of people. Interesting secondary characters add richness and depth, as Nina discovers that Cymbeline has its share of problems. Small-town politics come into play as the mayor initially turns down Nina’s application to open a B&B, only to fast-track the opening (three days) when she needs to find a temporary home for six displaced nuns. At the heart of the nuns’ situation, and also the dislike of many Cymbeline citizens, is a shady real estate developer.

And then there’s Harry Wescott, Harry Westcott, nephew of the previous owner of Nina’s home, who has a letter claiming she intended to bequeath the house to him. When Nina first meets Harry, he is dressed in a penguin outfit, working to promote the local Taste-Tee Freeze Creamery. I was never sure whether I liked Harry or not, and still have questions, which is a good thing. He’s a potential foe to Nina with his seemingly legitimate right to ownership, yet a reluctant friendship of sorts begins to develop as they form a truce. I feel sure we’ll see more of Harry in future stories and I actually look forward to that.

Although the murder takes place in the early pages, this story focuses more on the people, Nina’s efforts with the B&B, and the nuns, who I absolutely loved. Suspects abound, as well as red herrings, and I didn’t even try to solve the murder because the journey was so much fun. I look forward to returning to Cymbeline in future stories. The only negative for me was the occasional use of profanity, which was totally unnecessary.

Diane is a member of Mystery Writers of America and has served as the 2018 and 2019 Chapter President of the MWA Florida chapter. In addition to her mystery writing affiliations, she’s a member of the Cat Writers’ Association and belongs to the Palm Beach County Beekeepers Association. She’s a native Texan with a degree in Journalism from the University of Oklahoma, but has been living in the West Palm Beach FL area since 2006. She shares her “almost in the Everglades” home with her husband, dogs, cats, and a few beehives.